Shorter Scott Reid: There is no indignity which we Libs we won’t suffer, and no evil which we won’t allow ourselves to be strongarmed into supporting, if it means marginally saving face for the leader irresponsible enough to embrace them in the first place.

END_OF_DOCUMENT_TOKEN_TO_BE_REPLACED

A few days ago I wrote a post defending Tom Mulcair from a Maclean's story that claimed that he once asked Stephen Harper for a chance to serve him.And only turned down the job because he wasn't offered enough money.Having watched Mulcair in the Quebec National Assembly long before he entered

END_OF_DOCUMENT_TOKEN_TO_BE_REPLACED

I don't know what is keeping Stephen Harper awake at night these days. But judging from his deathly appearance he isn't getting much sleep.And I bet there are a lot of things on his mind, that keep him tossing and turning in his bed. Or wandering around the grounds of

END_OF_DOCUMENT_TOKEN_TO_BE_REPLACED 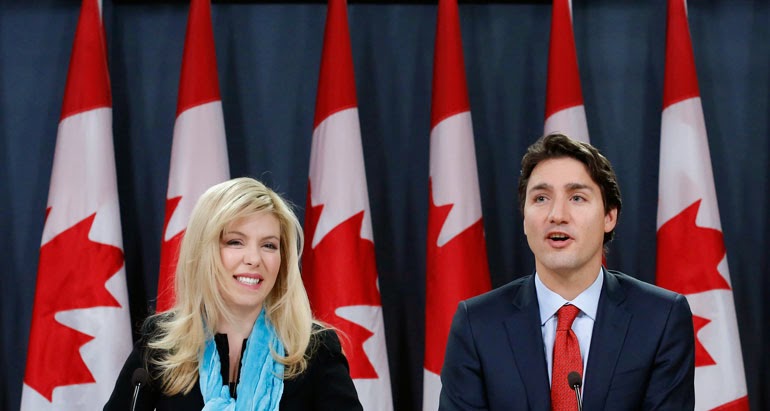 Today it was all about Eve in Canadian politics (one should really Google that plot before referencing it though), even after a mini-cabinet shuffle that made Pierre Poilievre a senior minister of the crown. Pierre gives hope to mindless partisans everywhere that excess of loyalty can trump dearth of qualification and intelligence.

No, it was Mississauga MP Eve Adams crossing the floor to the Liberal Party, and announcing her intent to seek a Liberal nomination in the Greater Toronto area, that overshadowed even the news of Jason Kenney as Minister of Making ISIS an Election Issue.
I still remember where I was when I heard Belinda Stronach was joining the Paul Martin government. It was Election Day in B.C., and I was working for Elections BC as a deputy returning officer. A local news reporter, who knew me as a Federal Liberal, came in to vote and asked me if I’d heard the big news. I called for relief, exited the voting hall and he told me what had happened. After he convinced me he wasn’t making it up, my reply, basically, was shut the front door.
Let me say this: Eve Adams is no Belinda Stronach. I found her conduct concerning as a Conservative MP, from the nomination drama to campaign expenses; my views haven’t changed simply because she’s now sitting as a Liberal. How much of her decision is principle, and how much is convenience? I have no earthly idea. Yes, she wanted to run as a Conservative right up until she couldn’t. That doesn’t mean her decision was purely opportunistic; leaving your party can be like breaking up with a spouse. You can put up with a lot of crap trying to make it work; finally, there’s a straw that breaks the camel’s back and enough is enough. Which isn’t to say there isn’t some opportunism here – she still wants to be an MP, and the Conservatives won’t have her.
We’re a big-tent party. I often disagree with fellow Liberals; that’s healthy. A number of NDPers have joined our caucus; we need to win votes from the Conservatives too if we’re to compete for government this fall. If Adams believes in Liberal values, including same sex marriage and a woman’s right to choose, then fine. Let her seek a Liberal nomination. And let it be a completely open nomination, with no special treatment from the leader’s office. If she can convince Liberals she shares our values and win a nomination, so be it. And if not, she had her chance in an open contest.
All parties will try to spin her decision. I think in reality it’s mixed for both sides. For the Liberals, one less CPC MP is a good thing for the Liberals and a bad thing for the Conservatives, and so is the narrative of progressive Conservatives leaving the Harper Party. On the flip side, Adams carries a great deal of baggage and this crossing looks more opportunistic than most. For the Conservatives, yes, they’re rid of a live wire that had become a distraction; their decision to bar her from running was soon to be public and messy – now it helps. On the other hand, she was still a parliamentary secretary, so how badly could they have thought of her and how seriously can we take their comments now? One less MP is one less MP. And for the NDP, once again someone is joining a party that’s not them and they’re left outside the news cycle looking in. Again. On the other hand, they may be glad to sit this one out.
On floor crossing in general, I’m not automatically opposed. I explained my feelings at length in this piece (Jeff Jedras: In defence of floor-crossing MPs), so I won’t repeat then at length here except to say each circumstance should be judged on its merits, and at the end of the day the electorate should hold the final judgement.
The questions today quickly turned to Adams’ partner Dimitri Soudas, a former national director of the Conservative Party and Stephen Harper loyalist. Two things here.
One, while rumours abounded, it appears that Soudas will not be joining the Liberal war room – his activities will be limited to serving as Adams’ sign chair. Of course, as any political veteran knows, that’s the best job to have – except in Sudbury in a winter byelection. He shouldn’t seek a senior position on the central Liberal campaign team, and he shouldn’t be offered one. While he may be full of Conservative secrets – and he may fight back if challenged – loyalty should still mean something, in spite of all that has happened here. While he supports his partner, spilling secrets is another matter. I can respect a person’s decision to change teams, but not to sell out the team they were loyal to just days ago. And it would be hard to trust such a person.
Two, I reject the suggestion that the questions about Soudas at the Adams presser this morning were sexist. He’s not just her partner. He’s a Harper confidante and former national director of the party privy to their electoral strategy. He lost his job trying to get her a nomination. Their relationship is very public, and that was their decision. His view on her decision was absolutely relevant, and the media would have been derelict in their duty to not have raised the issue. Lord knows we were all wondering the answer.
It was her right not to answer, but the question was fair and had nothing to do with gender. Such charges of bias should be reserved for actual honest to goodness examples of sexism, not wielded as a convenient political shield.
And now, let’s get back to talking about Conservative failure on the economy.

END_OF_DOCUMENT_TOKEN_TO_BE_REPLACED

Today it was all about Eve in Canadian politics (one should really Google that plot before referencing it though), even after a mini-cabinet shuffle that made Pierre Poilievre a senior minister of the crown. Pierre gives hope to mindless partisans everywhere that excess of loyalty can trump dearth of qualification

END_OF_DOCUMENT_TOKEN_TO_BE_REPLACED

And under the “methinks he doth protest too much” file, enjoy this. Recommend this Post

END_OF_DOCUMENT_TOKEN_TO_BE_REPLACED

The tale of Eve Adams gets increasingly melodramatic, and increasingly reminiscent of Helena Guergis. That she will suffer Helena’s political fate is looking more likely with each passing day. Readers may recall that prior to her fall from grace, Helena Guergis, at the Charlottetown airport in February of 2010, allegedly

END_OF_DOCUMENT_TOKEN_TO_BE_REPLACED

Uh oh. Somebody call Jason Kenney or an exorcist.Or an embalmer.There is trouble in the Garden of Steve. Read more »

END_OF_DOCUMENT_TOKEN_TO_BE_REPLACED

Responding to a post I wrote this morning commenting on a Lawrence Martin article, The Salamander offered the following trenchant assessment of what he predicts will be the Harper ‘legacy.’ Enjoy: .. I find the fading tiger analogy problematic.. maybe its just me .. Having a background in social work,

END_OF_DOCUMENT_TOKEN_TO_BE_REPLACED

And soon gone, would be my guess. Read this CBC report and watch the following video, both of which suggest to this observer that Eve Adams is not long for this political world: Recommend this Post

END_OF_DOCUMENT_TOKEN_TO_BE_REPLACED

Well as you probably know, I don't just question Stephen Harper's judgement, I question his mental state, and study it extensively.Because better safe than sorry eh?And in that regard, for a moment today, I thought that the shock of his faithful Dimitri's sudden departure had driven him over the edge.Read

END_OF_DOCUMENT_TOKEN_TO_BE_REPLACED

Listen to The Globe’s Campbell Clark and decide for yourself: Recommend this Post

END_OF_DOCUMENT_TOKEN_TO_BE_REPLACED

* With apologies to Joseph Scriven’s original hymn, What a Friend We Have in Jesus. One can only assume that these days there are far fewer congregants lustily singing the praises of their dark lord and master, Stephen Harper, in that hallowed place of worship known as the Conservative caucus.

END_OF_DOCUMENT_TOKEN_TO_BE_REPLACED

Well I can only imagine him today, huddled in his bunker with his closest advisers. The shrinking band of PMO fanatics he still trusts.Lamenting the fate of his faithful Dimitri.While suggesting for public consumption, that he was the one who fired him. Read more »

END_OF_DOCUMENT_TOKEN_TO_BE_REPLACED

by: Obert Madondo | March 31, 2014 Liberal Leader Justin Trudeau dropped the f-bomb when he addressed the crowd at the Fight for the Cure charity boxing match in Gatineau, Quebec, over the weekend. “I’m going tell you, there is no experience like stepping into this ring and measuring yourself,” Trudeau said. “Your

END_OF_DOCUMENT_TOKEN_TO_BE_REPLACED

Oh boy. I realize it's not easy to remain cheerful and optimistic in this dark Harperland. Not even in my little Hobbit Town where it's always Christmas.Not when this freezing winter seems to have gone on FOREVERAnd not when I can't even even tell my friends to cheer up, without

END_OF_DOCUMENT_TOKEN_TO_BE_REPLACED

Because Dimitri Soudas has terrible judgment. Backbench Spring MP Brent Rathgeber has quit the Conservative caucus. While the Tories are mired in scandal after scandal, the watering down of Mr. Rathgeber’s transparency bill appears to have been the clincher for the Alberta MP. As he stepped down, reaction from Conservatives

END_OF_DOCUMENT_TOKEN_TO_BE_REPLACED

Canadian Press is reporting this: “Tory cabinet ministers contradict record on Port of Montreal controversy.” There are quotes from Industry Minister Christian Paradis and Maxime Bernier denying that the federal government took a position on promoting Robert Abdallah as its choice to head the Port of Montreal: When asked why