*Updated link due to the Lady Alison’s astute discovery. (Thanks, Alison!) Apparently the story disappeared off the web ’til it reappeared this morning at the updated link to the Montreal Gazette below . . . .As “drf” exclaimed when he pointed this* out to me: “WTF?!?”What the hell has harperco wrought now ? ? ? ? 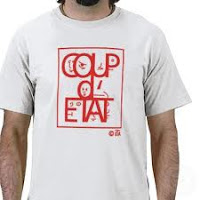 OTTAWA — RCMP officials have identified a new threat to national security: a coup d’etat.The reference to a violent overthrow of the federal government is contained in the RCMP’s plans and priorities report to government for 2010-11. It lists national security as one of five operational priorities for the year.The document then cites four specific security concerns:• Espionage and sabotage.• Foreign-influenced criminal activities detrimental to the interests of Canada.• Terrorism.• And . . . “activities aimed at overthrowing, by violence, the Government of Canada.” (Ed: emphasis mine)RCMP officials were not immediately available Friday to explain the reference, but such language has not appeared in previous RCMP reports.