END_OF_DOCUMENT_TOKEN_TO_BE_REPLACED

In response to Boobquake, some people who disagreed with the idea came up with Brainquake:

“Everyday women and young girls are forced to ‘show off cleavage’ and more in order simply to be heard, to be seen, or to advance professionally. The web is already filled with images of naked women; the porn industry thrives online and many young girls are already vulnerable to predatory abuse. Violence against women and girls has a direct correlation to the sexualisation of women and girls. The extent of their sexualisation is evident in the hundreds of replies that pour into the ‘Boobquake’ Facebook page where women write, apologetically: ‘I don’t have boobs, not fair’ or ‘Hey, I only have a C cup…’ and ‘What about those of us who no longer have cleavage? They sag too low.'”

“Brainquake’s” creators say Sedighi’s comment was no news to Iranian women, nor was it funny. They note that for the past 30 years, the Islamic Republic has violated women’s rights with what they describe as repressive policies.

“Iranian women have fought back in various ways, one of which has been to dress ‘subversively,’ but as is evident in the Green Movement, it is not their ‘beauty’ or bodies that they have utilized in fighting against a brutal theocracy but their brains, their creativity, art, writings, etc.”

Some people are offended by Brainquake because they feel that it encourages women to feel ashamed of their bodies. In an attempt to unite the two sides, maymay has come up with Femquake:

Both breasts and brains are good for humanity and deserve our respect. Don’t coerce women into being proud of one over the other, or feeling ashamed of either! YES WE CAN all get along.[…]

Part of what that means is that every woman has the prerogative to do as she pleases, from showing off cleavage on Boobquake to showing off intellect on Brainquake. […]

Regardless of your gender, please join Femquake on April 26th, by blogging, tweeting, and publicizing the achievements of women, whether physical, intellectual, or (preferably) both! Tag your blog post with “Femquake” and your tweets with #Femquake to participate.

Since I feel that she is often overshadowed by her sisters Charlotte and Emily, I am writing about Anne Brontë. 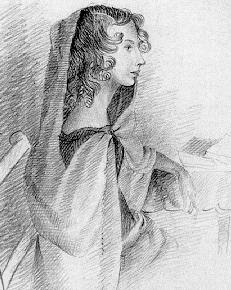 A few years ago when I read The Tenant of Wildfell Hall, I was surprised at how bad-ass the book was. It wouldn’t be considered to be “bad-ass” now, but for the 19th century it was ahead of it’s time. The book is about a single mother, Helen Graham, who moves into a new neighbourhood and supports herself by painting. One of her neighbours, Gilbert Markham, discovers that she was not widowed; she had left her husband and was hiding from him. Her real name was Helen Huntingdon. She had been unhappy in her marriage; her husband was an abusive alcoholic. She left him and took her son with her because she felt that her husband was a bad influence on him.

It is easy today to underestimate the extent to which the novel challenged existing social and legal structures. May Sinclair, in 1913, said that the slamming of Helen Huntingdon’s bedroom door against her husband reverberated throughout Victorian England. Anne’s heroine eventually leaves her husband to protect their young son from his influence. She supports herself and her son by painting, while living in hiding, fearful of discovery. In doing so, she violates not only social conventions, but also English law. At the time, a married woman had no independent legal existence, apart from her husband; could not own her own property, sue for divorce, or control custody of her children. If she attempted to live apart from him, her husband had the right to reclaim her. If she took their child with her, she was liable for kidnapping. In living off her own earnings, she was held to be stealing her husband’s property, since any income she made was legally his.
-from The Oxford Companion to the Brontës, by Christine Alexander and Margaret Smith

You may wonder, as I did, why this daring and radical novel receives so little attention compared to Charlotte Brontë’s Jane Eyre and Emily Brontë’s Wuthering Heights. Well, it seems that the responsibility for this slight lies with Charlotte. After Anne’s death at the young age of 29, Charlotte, who had been offended by the content of her sister’s novel, prevented it from being republished.

“Wildfell Hall it hardly appears to me desirable to preserve,” Charlotte wrote. “The choice of subject in that work is a mistake, it was too little consonant with the character, tastes and ideas of the gentle, retiring inexperienced writer.” While Charlotte and Emily’s novels continued to be published, The Tenant of Wildfell Hall fell off the radar. When it was finally republished (shortly before Charlotte’s death) six years after the second edition, there were many omissions which weakened the novel. At this point Charlotte and Emily had gained literary fame while Anne remained unknown; having her novel butchered didn’t help matters.

“My object in writing the following pages was not simply to amuse the Reader,” Anne wrote in the preface to the second edition of The Tenant of Wildfell Hall. “Neither was it to gratify my own taste, nor yet to ingratiate myself with the Press and the Public: I wished to tell the truth, for truth always conveys its own moral to those who are able to receive it.” Well, I hope that Anne Brontë will one day be seen as being equal to her sisters, which she was, and that the honesty in her novel will receive the recognition that it deserves.

END_OF_DOCUMENT_TOKEN_TO_BE_REPLACED

In response to Boobquake, some people who disagreed with the idea came up with Brainquake: “Everyday women and young girls are forced to ‘show off cleavage’ and more in order simply to be heard, to be seen, or to advance professionally. The web is already filled with images of naked

END_OF_DOCUMENT_TOKEN_TO_BE_REPLACED

In response to Boobquake, some people who disagreed with the idea came up with Brainquake: “Everyday women and young girls are forced to ‘show off cleavage’ and more in order simply to be heard, to be seen, or to advance professionally. The web is already filled with images of naked

END_OF_DOCUMENT_TOKEN_TO_BE_REPLACED

I love books. I’ve always been an avid reader. Since becoming a mother, I’ve had less time to read, unless I’m reading out loud and the book has pictures. I’ve only recently found the time to start updating this blog again, so I suppose that’s a start …

END_OF_DOCUMENT_TOKEN_TO_BE_REPLACED

by matttbastard (Photo: Paul Keller, Flickr) Jane Mayer on the sudden prominence of ex-W speechwriter (and current Hiatt-approved pro-torture propagandist*) Marc Thiessen and why those who don’t pop wood for enhanced interrogation [sic] should be wary: The publication of “Courting Disaster” suggests that Obama’s avowed … Continue reading →

END_OF_DOCUMENT_TOKEN_TO_BE_REPLACED

by matttbastard Busy busy busy lately, kids (and by ‘busy busy busy’ I mean ‘lazy lazy lazy’, as my always-obsessive Twitter output will attest — 140 characters is a lot less daunting than 140 words, sadly). But we can’t enter … Continue reading →

END_OF_DOCUMENT_TOKEN_TO_BE_REPLACED

A friend passed this on. She says the BBC believes the average person will only have read 6 books from this list. At least 6 of these I had to read for school. It is definitely a British list but there are several important books on it.1 Pride and Prej…