Alaska has just logged another record – its earliest 70 degree day. Parts of the state have had their earliest 70-degree readings on record. Klawock, a town in southeastern Alaska, reached 70 F on March 19 — the earliest any spot in the state has hit that high.  More records

END_OF_DOCUMENT_TOKEN_TO_BE_REPLACED 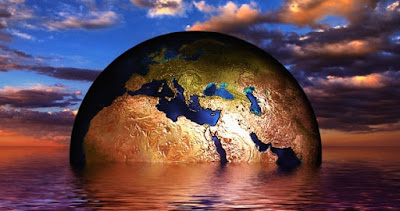 The other day I wrote a post describing how the National Media Council dismissed a complaint from a Toronto Star reader that arose from a New York Times story detailing climate change’s impact on the people of Isle de Jean Charles, Louisiana. The reader objected to the fact that climate change was cited as a reason the residents are facing relocation.

The judgement was that there was no need to provide a counterbalance, as the complainant insisted, on the climate change assertions made in the story; the Council declared that climate change is a fact that has been scientifically established, and hence junk science alternatives were not required for balance.

The fact of climate change is evident for anyone who cares not to indulge in willful ignorance. Increasingly intense storms, floods, droughts, habitat destruction, loss of biodiversity and wildfires are attested to in the media almost daily; it seems we have crossed a line, and the changes are happening far more rapidly than predicted by the models.

A case clearly in point is what is happening to the people of Barrow, Alaska, the northernmost municipality in the United States, now facing the prospect of becoming climate-change refugees.

Warming air, melting permafrost and rising sea levels are threatening their coastline, and researchers predict that by midcentury, the homes, schools and land around Barrow and its eight surrounding villages will be underwater. This despite decades of erecting barriers, dredging soil and building berms to hold back the water.

“The coastline is backing up at rates of 10 to 20 metres per year,” says Robert Anderson, a University of Boulder geomorphologist who has studied Alaska’s landscape evolution since 1985 and who first noticed in the early 2000s how alarming the erosion was becoming. “It’s baffling.”

When the sea ice melts, the coast becomes exposed to waves, wind and storms that slam into the shore, causing erosion. As ice moves farther from shore, waves can be six-metres high when they reach land, Anderson says.

“The only thing we can do, as far as I’m concerned, is move our towns inland,” says Mike Aamodt, the former acting mayor of Barrow and its surrounding villages of the North Slope Borough, which stretches over 230,000 square kilometres, an area larger than Southern Ontario.

Yet another danger the residents face is posed by a thawing permafrost:

As air and sea temperatures have notched up, there has been a warming of the permafrost, the thousands-of-years-old subsurface layer of frozen soil, rocks and water. That layer can be as much as 600 metres deep in parts of this area.

“Sometimes I have that eerie feeling — I’m, like, ‘Oh gosh, we’re on the permafrost,’ ” says Diana Martin, a Barrow-born Inupiaq who works in the town’s museum, over a bowl of caribou soup at her sister’s home a little more than a kilometre from the coast. “What if we start floating away?”

Adaptation has not worked in Barrow, and the remaining alternative, relocation, is fraught with problems, not the least of which are the costs that would be involved in such a migration:

So the grave problems caused by human activity and indulgences are continuing apace, with no real plans for either mitigation or adaptation. It is all well and good, for example, for Barack Obama to call for $10 billion annually to combat climate change, but as you can see in the case of Barrow and surrounding Alaskan communities, that amount will prove a mere pittance in the very near future.

This and that for your Sunday reading.- Andrew Jackson makes the case for a federal budget aimed at boosting investment in Canada’s economy:Public infrastructure investment has a much greater short term impact on growth and jobs per dollar spent than …

END_OF_DOCUMENT_TOKEN_TO_BE_REPLACED

PHOTOS: Alaska Governor Bill Walker illustrates about how much is left in the northern state’s budget now that oil prices have gone south. (Alaska Dispatch News photo.) Below: The wild rose, official flower of both Alaska and Alberta; baked Alaska, g…

END_OF_DOCUMENT_TOKEN_TO_BE_REPLACED

“President Barack Obama is making Alaska the last leg of a 14,000-mile trip focusing on climate change in advance of a critical international meeting. Scientists say this year the average glacier will lose 30 inches of thickness.” NBC. What more proof we need?

END_OF_DOCUMENT_TOKEN_TO_BE_REPLACED

More Canadian homes need to be built like this to survive coming fossil fuel shortages. It certainly saves a lot of money for the homeowner. Passive House in Alaska using water insulated in a tank as a giant battery for energy. The world would have forgotten the Saskatchewan house, too,

END_OF_DOCUMENT_TOKEN_TO_BE_REPLACED

Washington took recreational marijuana off the state criminal books two years ago.  Last night voters in Alaska and Oregon followed suit.  California is expected to do the same in 2016. Imagine.  British Columbia, the province once known for “B.C. Bud”, could be the last jurisdiction on the Pacific Coast to

END_OF_DOCUMENT_TOKEN_TO_BE_REPLACED

In Alaska they are trying something rather cool – a wind turbine that floats in the air. The turbine will be tethered to the ground and will be a test run of this new technology. if successful, the turbine can be used to power remote communities and be used in

END_OF_DOCUMENT_TOKEN_TO_BE_REPLACED

Remember that global warming target of keeping temperature increases within 2 degrees Celsius by 2100?  2C, you may recall, is supposed to be the point within which we might – just might – avoid catastrophic, i.e. runaway, global warming.  2C, it’s thought (perhaps wishfully) will give us a better than

END_OF_DOCUMENT_TOKEN_TO_BE_REPLACED

Since the crisis in Ukraine made the headlines Russia has been cast as the villain with predictable stereotypes and misconceptions about things Russian showing up on MSM. From a Russian perspective a lot of it must seem clueless, tiresome or outright offensive but such “insights” add to a tabloid narrative

END_OF_DOCUMENT_TOKEN_TO_BE_REPLACED

shutterstock_88735852.jpg Amnesty International and the Centre for Environment, Human Rights and Development (CEHRD) dropped a bombshell early this week, unveiling documents pertaining to the Royal Dutch Shell Oil 2008 Bodo oil pipeline spill. The documents indicate that the Shell spill released 60 times the amount of oil Shell had originally reported in