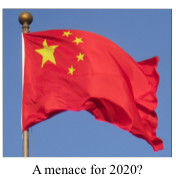 During the Cold War, conservative politicians could always be relied on to trot out the “red menace,” accusing opponents of being soft on communism. It was usually good for a few votes—in the U.S. for many votes. It was, of course, just a version of one of the oldest and most reliable political strategies—exploiting an enemy, or if necessary creating one, to draw voters around yourself as defender of the faith.

Communism, particularly Soviet communism, was a reliable enemy. However the Cold War has now been over for 30 years, Soviet communism is dead and Chinese communism has been (Read more…) by capitalism, so we might think that particular enemy would have lost its value.

But judging by the Trump administration’s railing against China these days, one can’t help but wonder if the eastern giant, capitalist-modified though it may be, isn’t being revived as the red menace. In the tradition of accusing enemies of being soft on communism, the Trump campaign increasingly accuses Joe Biden of being soft on China.

Trump has laid responsibility for  his country’s COVID-caused misery at the door of China, with the World Health Organization thrown in as aider and abettor. People around Trump promote the antagonism and his most anti-China hawk Peter Navarro steadily gains in stature. Trump was of course engaging in China-bashing well before CORVID. The bug has now added a new element to his diatribes.

As to whether or not the strategy will work, the odds are favourable. Polls indicate that Americans overwhelming blame China for the pandemic and are deeply angry with the Chinese government. Certainly Congress is on side, introducing a number of bills that would direct the manufacture of critical supplies away from China. Various states are even seeking ways to sue China for their COVID costs.

Trump may not be quite as enthusiastic about making China-bashing central to the campaign as some of his advisers. It could cost him a multibillion-dollar trade deal, and then there’s his apparent admiration for Xi Jinpeng. Trump never met a dictator he didn’t like. Nonetheless, the audience for an anti-China message is there. The strategy looks good.

The rest of us should hope he doesn’t pursue it too vigorously. Two superpowers engaged in escalating hostility, when the leaders of both are fervent nationalists, could lead to catastrophe, even of the nuclear variety. The coronavirus pandemic is more than enough catastrophe at the moment.