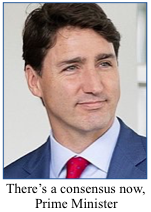 Has this election awakened Canadians to the need for proportional representation? The results of a recent Angus Reid poll certainly suggest so. From the support of under half the electorate following the last election, PR is now supported by over two-thirds.

Support has increased with voters of all parties but most dramatically among Conservatives. In 2016, twice as many Conservatives opposed PR as supported it; now two and a half times as many support it. The fact their party got more votes than the Liberals but Justin Trudeau remains prime minister while they continue to languish in opposition has apparently (Read more…) a lot of minds. Liberal voters showed the least increase and are now the least supportive.

NDP and Green voters remain solidly in favour. And so we might expect. The NDP got twice as many votes as the Bloc but fewer seats. The Bloc got only 18 percent more votes than the Greens but ten times as many seats. The Bloc was rewarded for contesting seats only in Quebec while the NDP and the Greens were punished for contesting seats across the country. Thus is regionalism exaggerated, exactly what our highly regionalized country doesn’t need.

Support for PR is also strong in all areas of the country. The Prairie Provinces, most opposed to PR in 2016 are now the most supportive. These Conservative voters no doubt noted that the Liberals won almost half the seats in the House with only a third of the vote.

2016 surveys found a lot of “don’t knows” or “don’t cares.” The new survey shows broad, enthusiastic support. Prime Minister Trudeau justified the betrayal of his promise last time arguing there was no consensus for change. He can no longer credibly make that argument. So all you supporters of PR, get out your pens and let him know.