This and that for your Thursday reading. – Mark Rice-Oxley points out the observations of the U.N. Special Rapporteur on Health as to the stress and mental illness caused by austerity. Robert Booth reports on the recognition that yet another round of giveaways to the rich and clawbacks from everybody

END_OF_DOCUMENT_TOKEN_TO_BE_REPLACED

Assorted content to end your week. – Lawrence Mishel points out that Donald Trump’s giveaways to the rich actually resulted in a sharp decline in bonuses paid to workers. – Robert Plummer reports on the precarity facing lower-income workers in the UK. And John Clapp writes from experience about the

END_OF_DOCUMENT_TOKEN_TO_BE_REPLACED

Canada has always been a highly regionalized country—the Maritimes, Quebec, Ontario, the Prairies, B.C., all with varying interests and economies and, with Quebec at least, culture. One particular complaint is that the country is run from the centre, i.e. Quebec and Ontario dominate with the other regions struggling to be

END_OF_DOCUMENT_TOKEN_TO_BE_REPLACED

This and that for your Thursday reading. – Jeff Stein reports on Bernie Sanders’ plans to transfer power from capital to people. And PressProgress highlights the Saskatchewan Party’s continued reliance on corporate funding from outside the province. – Ron Walter recognizes that Scott Moe’s carbon tax posturing is purely a

END_OF_DOCUMENT_TOKEN_TO_BE_REPLACED

Miscellaneous material to start your week. – CBC examines the obscene corporate subsidies doled out by Canadian governments – with Alberta ranking as the worst offender even as it also takes in less revenue than other provinces. And Jeff Gray reports on the growing gap between Doug Ford’s budget promises

END_OF_DOCUMENT_TOKEN_TO_BE_REPLACED

Assorted content to end your week. – PressProgress digs into Statistics Canada’s findings about precarious work in Canada, highlighting the connection between temporary work and subpar pay and working conditions: According to a report by Statistics Canada, published Tuesday, the percentage of Canadian workers hired on temporary contracts increased from

END_OF_DOCUMENT_TOKEN_TO_BE_REPLACED

Miscellaneous material for your mid-week reading. – Gerald Caplan writes about the existential threats to humanity which are being either escalated or ignored: We are rapidly approaching the same kind of escalation that led the world to the Cuban missile crisis of 1962, with humankind on the very brink of

END_OF_DOCUMENT_TOKEN_TO_BE_REPLACED

Assorted content to end your week. – Patrick Gossage discusses the desperate need for Canadian governments at all levels to take meaningful action to eliminate poverty: The reality is that low-income Canadians are invisible and lack political clout. In Toronto, they are concentrated in downtown areas close to the gleaming

END_OF_DOCUMENT_TOKEN_TO_BE_REPLACED

Some people are concerned about the Senate’s self-definition as a council of owls seeking to keep less-privileged citizens from governing in their own interests. But have they considered this might be a perfectly fair description?

END_OF_DOCUMENT_TOKEN_TO_BE_REPLACED

Miscellaneous material to start your week. – Paul Krugman notes that after promising to bring some outside perspective to politics, Donald Trump is instead offering only a warmed-over version of the Republicans’ typical voodoo economics. And John Cassidy highlights how Trump’s plan appears to be nothing more than to wage

END_OF_DOCUMENT_TOKEN_TO_BE_REPLACED

Miscellaneous material to start your week. – The Star’s editorial board writes that it’s long past time for governments to stand up for people facing precarious work: (P)recarious workers, many of them millennials, have been largely left behind by legislators who say the shift is inevitable and there’s nothing much

END_OF_DOCUMENT_TOKEN_TO_BE_REPLACED

Yes, there’s no doubt that Kevin O’Leary’s suggestion of selling off Senate appointments is nothing short of asinine. That’s not so much because the idea is inherently unconstitutional, but because of its substantive implications. The sale of Senate seats it would involve institutionalizing the worst aspects of the Senate’s historical

END_OF_DOCUMENT_TOKEN_TO_BE_REPLACED

This and that for your Thursday reading. – Valerie Strauss discusses the disastrous effects of corporatized education in the U.S. And Alex Hemingway examines how B.C.’s government (like Saskatchewan’s) is going out of its way to make it impossible for a public education system to do its job of offering

END_OF_DOCUMENT_TOKEN_TO_BE_REPLACED

Here, on the Senate’s recent attempts to claim any relevance to Canadian politics, and what they should tell us about the failures of our actual elected representatives.For further reading…- OpenParliament’s status report on Bill C-14 (featuring the …

END_OF_DOCUMENT_TOKEN_TO_BE_REPLACED

This and that for your Thursday reading.- Andrew Coyne argues that the Senate’s role in overruling elected representatives – which only seems to be growing under the Trudeau Libs – represents an affront to democracy. And Duncan Cameron has some suggest…

END_OF_DOCUMENT_TOKEN_TO_BE_REPLACED

Assorted content to end your week.- David Crane identifies the good news in the Parliamentary Budget Officer’s report on climate change – which is that we can meet our greenhouse gas emissions targets through readily feasible policy choices as long a…

END_OF_DOCUMENT_TOKEN_TO_BE_REPLACED

There’s reason to be wary about the Libs’ handling of the Senate, as Thomas Walkom writes in his latest column. But it’s also worth noting that contrary to Walkom’s conflation of the two, there are important differences between selecting prospective Se…

END_OF_DOCUMENT_TOKEN_TO_BE_REPLACED

This and that for your Thursday reading.- Owen Jones writes that the UK’s flooding is just one example of what happens when the public sector which is supposed to look out for the common good is slashed out of short-term political calculation. And J. B…

END_OF_DOCUMENT_TOKEN_TO_BE_REPLACED

It is not often I get to talk about issues related to the monarchy on this blog. I mostly keep that on the other blog I writefor. However the Monarchist League of Canada recently surveyed the main federal parties on their views towards theCanadian Monarchy. One of the answers was

END_OF_DOCUMENT_TOKEN_TO_BE_REPLACED 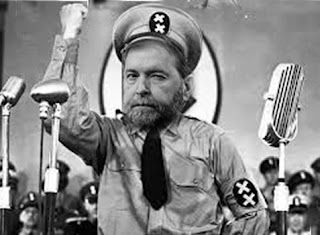 Recenty, former NDP MP, Bruce Hyer, has come out to the press about his former boss’s dictatorial style and problems he had with honesty; evident in the way that he is constantly contradicting himself.

When asked during his interview with Peter Mansbridge about this, Mulcair only said that Hyer did not want to vote with his colleagues.

In an email to HuffPost, however, Hyer called Mulcair’s statements “a total fabrication.”  “I always supported 95 per cent of the NDP party platform. I still support much of it! But I feel very strongly that my primary role is as the representative of my constituents,” Hyer wrote.

“On some issues, an MP’s responsibility is to put … constituents ahead of the party line. It is interesting that Mulcair immediately contradicted himself and said that I was ‘someone who walked away from the party on a single issue.’ Again and again, I see and hear a man who in his pursuit of power will contradict himself.”

In fact as early as 2013, the Globe and Mail had already noticed the trend.

Much attention has been given to Conservative backbenchers who push socially conservative issues and are later overruled by cabinet. What is not well known is that Conservative MPs are far more likely to support motions from other parties – all of which are to the political left of the governing party. In contrast, the voting record of the official opposition under NDP leader Thomas Mulcair shows ironclad discipline. Not a single vote has been cast that is out of step.

This certainly lends credence to Hyer’s comments. One of Mulcair’s nicknames when he was in the Quebec legislature was objet immobile or immovable object.  He was very obstinate.  Recent analysis of voting patterns have shown that the NDP vote with their leader 100% of the time, while the Conservatives only 76%. So who’s the dictator now?

During the 2004 election campaign, many Canadians were concerned with Stephen Harper’s views on the Constitution, and fears that his platform would result in many court challenges.  It has.  But how is that any different from Mulcair’s platform?  He is also threatening the Constitution with his promise to abolish the Senate.

Harper was also antagonistic toward the Supreme Court, suggesting that they had too much power.  As a populist, he believed that all the power should rest in the hands of elected MPs.  Is this not exactly what Thomas Mulcair is suggesting today?

He claims that if elected the Senate will have to answer to him.  I find that rather frightening.  Yes, the Senate is wounded but it is not broken, and is a vital part of our democracy.  They are supposed to the sober second thought, that would protect us from leaders like Mulcair and Harper, who believe in an autocratic style of government.

Sadly, they have become little more than a partisan cesspool, but that is where we need change.  Senators should not belong to any party.  If they are caught campaigning for, or against, any political party, they can no longer be a senator.  We need them to represent us.  We are the ones paying the bills.

Both Harper and Mulcair want the Constitution reopened to push their own agendas.  It won’t happen because both Quebec and Ontario, have already said that they are not prepared to do that.

I have been accused recently of not being progressive because of my opposition to Thomas Mulcair. However, it is as a progressive, that I am sounding the alarm.

In November of 2009, Linda McQuaig wrote in the Toronto Star

If, as polls suggest, Stephen Harper is poised to win a majority, it’s largely due to the media notion that his past reputation for extremism no longer holds. In fact, apart from his reluctant embrace of economic stimulus, Harper has shown little of the “moderation” that supposedly now puts his government comfortably within the Canadian mainstream.

I feel as McQuaig did then.  The media is once again being blissfully ignorant, or intentionally misleading, by ignoring Mulcair’s past.  He was not an “extremist”,  but he was virulently right-wing.  Most progressive journalists warned of Harper’s devotion to the principles of Margaret Thatcher, yet most, including McQuaig, are now eerily silent on Mulcair’s.

We can’t make the same mistake twice.  If Mulcair is re-elected it will be as a Member of Parliament. Depending on the outcome of the election, he could be prime minister, opposition leader, or leader of the third party.

But under no circumstances will he be elected supreme being.  He will not dictate to the Senate.  He will not unilaterally change our constitution and he will not simply repeal anything, without the support of both Houses.

We’ve had a decade of this kind of government, and Canadians are weary of it.