Pretty much every time I hear Canadian Prime Minister Stephen Harper or one of his Conservative minions speak, I think of this song: “Propaganda” by the defunct punk/Oi! band Blitz. The same goes for when I hear Ontario Premier Kathleen Wynne or one of her provincial Liberal hacks spew BS

END_OF_DOCUMENT_TOKEN_TO_BE_REPLACED

Canadian and American right-wing politicians going on about Islamic terrorism has a sickening stench of hypocrisy, considering the fact that the American government and other Western governments helped fund, arm and train Muslim extremists during the Cold War, which has contributed to many of the problems in the Middle East

END_OF_DOCUMENT_TOKEN_TO_BE_REPLACED 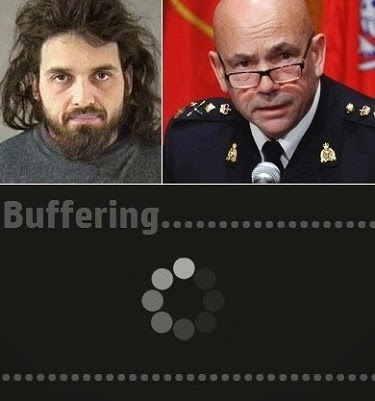 After we were told the video made by Ottawa shooter Michael Zehaf-Bibeau would be made available to the public, the RCMP has changed its mind, or had it changed for them. RCMP commissioner Bob Paulson wasn’t exactly clear on the specifics. He said there may be a release of “some aspects of a transcript of the video”… whatever that means.

Given the terrorist narrative favored by the government and also by the police, how can the public be sure that ‘aspects of the transcript’ aren’t cherry picked to reenforce the preferred narrative. Surely the honest and transparent thing to do would be to release the video for the public to make its own judgment or alternatively release the entire transcript, rather than “aspects” of it. If as some claim, there are concerns about the video being exploited in some way for jihadi propaganda, the odds of that happening would be diminished considerably if a transcript was involved – cop out though that would still be – because there is no compelling reason to sit on the video.

There are any number of jihad-inspired videos in circulation that glorify jihad and attack the West… lots of audio-visual incentive out there for anyone influenced by such material. The release of Zehaf-Bibeau’s video – assuming it contains any such content – would not likely make a substantial difference one way or another.

In giving reasons for withholding the video, Paulson also made vague allusions to “some sort of court process.” But given what we know this doesn’t add up. Zehaf-Bibeau is dead and there were no known accomplices.

The decision to withhold the video seems to be more about political calculations. Perhaps Harper is concerned that the video’s contents might in some way influence public opinion about Canada’s involvement in the US-led war in the Middle East… part of the government’s deeply misguided foreign policy agenda.

There has been some debate in parliament about whether or not the term “terrorism” should be used in describing Zehaf-Bibeau’s actions. But from the outset it was clear that the government was dead set on labeling it a “terrorist attack” despite information about Zehaf-Bibeau’s past that indicate mental and emotional problems were a likely trigger.

Zehaf-Bibeau’s mother, Susan Bibeau, who presumably knew her son better than most, denied that he was a terrorist acting “on behalf of some grand ideology or for a political motive.” She said he felt “cornered” and “acted  in despair.” She is also skeptical of the radicalization theory and said she believes “mental illness is at the center of this tragedy.”

According to a recent poll Susan Bibeau’s view is shared by a high percentage of Canadians … while 36% describe the shooting as a “terrorist attack” 38% believe mental illness played a part in it.

Although the Harper government has been careful not to appear to be chaffing at the bit to beef up enforcement powers in the wake of the attack… given the reactionary right-wing nature of this government you can be sure it wants to extract as much mileage as possible from the incident. The wheels are apparently in motion.  On Monday a Commons committee passed Bill C-44 that hands additional powers to the Canadian Security Intelligence Service (CSIS). According to Public Safety Minister Steven Blaney, another bill is in the works that will boost law enforcement powers in the areas of surveillance, detention and arrest.

In the course of conjecturing out loud when and if the Zehaf-Bibeau video might see the light of day, RCMP chief Paulson wasn’t big on specifics…  “I don’t know when it’s going to be released. It will certainly be released some day, but I would be a fool to say when it will be released.”

END_OF_DOCUMENT_TOKEN_TO_BE_REPLACED

After we were told the video made by Ottawa shooter Michael Zehaf-Bibeau would be made available to the public, the RCMP has changed its mind, or had it changed for them. RCMP commissioner Bob Paulson wasn’t exactly clear on the specifics. He said there may be a release of “some

END_OF_DOCUMENT_TOKEN_TO_BE_REPLACED

Following the Ottawa shooting both the Globe and Mail and the Toronto Star ran headlines that signaled the nation was under assault. The Globe went with the single word “Attacked” superimposed on a silhouette of parliament, with a solitary red-and-white Canadian flag fluttering against the background gloom. The Star went

END_OF_DOCUMENT_TOKEN_TO_BE_REPLACED

Apparently the $24-million of our tax money the federal government spent on an ad campaign to promote Canadian oil and the Keystone XL pipeline in Washington has gone down the drain. According to experts on Canada-U.S. relations, the campaign was a bust. “Buy our oil because we’re nice people—that doesn’t

END_OF_DOCUMENT_TOKEN_TO_BE_REPLACED

The ongoing secretive TPP negotiations could result in the largest global ‘trade’ agreement encompassing about 40 per cent of the world economy. The post Secretive critical talks on the TPP happening in Ottawa appeared first on The Canadian Progressive.

END_OF_DOCUMENT_TOKEN_TO_BE_REPLACED

After the way Omar Khadr has been persecuted by both the American government and ours, I wouldn’t have thought any more outrageous news of this sordid affair could emerge. But it has. After a hard-fought freedom of information case by the New York Times and the American Civil Liberties Union,

END_OF_DOCUMENT_TOKEN_TO_BE_REPLACED

Despite being less than a week away from hosting hundreds of negotiators and other officials from the other 11 TPP member countries, the Canadian government has kept a tight lid on any details about the Ottawa meeting. The post Canada setting new global standard for TPP secrecy: Council of Canadians

END_OF_DOCUMENT_TOKEN_TO_BE_REPLACED

by: MICHAEL GEIST | June 4, 2014 In recent years, it has become fashionable to argue that Canadians no longer care about their privacy. Supporters of this position note that millions of people voluntarily post personal information and photos about themselves on social media sites, are knowingly tracked by Internet advertising giants

END_OF_DOCUMENT_TOKEN_TO_BE_REPLACED

The Harper Cons have announced they are naming the new Finance Canada building after the worst finance minister in Canadian (and Ontario) history, “Deficit Jim” Flaherty.  To reflect Flaherty’s disastrous political record and mean-spirited personality, it will: Be small and useless Go billions of dollars over budget and have a

END_OF_DOCUMENT_TOKEN_TO_BE_REPLACED

“I can’t even get my friends to like me.” Mark this date: April 16, 2014. Disgraced Canadian prime minister Stephen Harper tells the truth for the first time in his political career, as he campaigns at the state funeral of former finance minister Jim Flaherty. The rest of Harper’s speech

END_OF_DOCUMENT_TOKEN_TO_BE_REPLACED

Canadians will forever be indebted because of Jim Flaherty. Regardless of what one thinks of the recently deceased man on a personal level, if one uses objective, non-emotional criteria, it is clear that he was probably the worst finance minister in Canadian history. Unfortunately for us, his replacement, Joe Oliver,

END_OF_DOCUMENT_TOKEN_TO_BE_REPLACED

March 12, 2014 was the day that the Canadian government officially ended its 12-year occupation of Afghanistan. What a pointless waste of lives, money and resources for a so-called “mission” that was never clearly defined and kept changing whenever the previous excuses stopped fooling the public. Hopefully the Canadian military

END_OF_DOCUMENT_TOKEN_TO_BE_REPLACED

There has been a lot of talk in the Canadian mainstream media and from the mainstream Canadian political parties about the middle class, but almost no discussion of the working class. Even the (slightly) left-of-centre New Democratic Party (NDP) keeps using the buzzwords “middle-class families” instead of “workers” or “working-class

END_OF_DOCUMENT_TOKEN_TO_BE_REPLACED

Stephen Harper and Pierre Poilivere, the minister in charge of dismantling democracy in Canada. Stockwell Day, Chuck Strahl and Stephen Harper. Day and Strahl are disgraced former Conservative MPs who now work as sleazy lobbyists. Tom Flanagan and Stephen Harper. Flanagan, who is Harper’s political mentor and former colleague, is

END_OF_DOCUMENT_TOKEN_TO_BE_REPLACED

Harper-&-Rogues Gallery – Part 1 Recent news that the drummer in Stephen Harper’s terrible cover band was charged with sex crimes re-emphasizes the fact that Harper loves to surround himself with sleazebags, crooks and various ne’er-do-wells. That’s because he is one of them. Here is part one of a gallery

END_OF_DOCUMENT_TOKEN_TO_BE_REPLACED

The unholy trinity of the Alberta tarsands industry, the Conservative Party and the right-wing media has gone all-out in its attacks on Neil Young for his stance against their destructive policies and actions. One thing that these corporate wolves and subservient sheep overlook is that, of course, Neil Young

END_OF_DOCUMENT_TOKEN_TO_BE_REPLACED

Crappy New Year 2014: Canada’s economy in the shitter Yes, it’s the economy, stupid! As of January 2014, the Canadian economy continues to be shite, swirling down the toilet. The Harper Conservatives are flushing our country down the drain. When I say “the economy”, I mean the real, boots-on-the-street, money-in-your-pocket