See the ad here: Toronto Star: New NDP TV ad emphasizes continuity over change “Throughout his public life, Tom Mulcair has a proven track-record of fighting for people,” said NDP National Director Chantal Vallerand in a statement. “These ads will help reach out to all those Canadians who have been

END_OF_DOCUMENT_TOKEN_TO_BE_REPLACED

Fresh off Easter break the NDP has released it’s newest ad, presenting the leader of the Opposition Thomas Mulcair to English speaking Canadians. The video is sharp, and a noticible return to the ads of old for the NDP where people talk about the person for whom the ad is

END_OF_DOCUMENT_TOKEN_TO_BE_REPLACED

Many NDP members were worried during the leadership campaign that Mulcair had some extreme views on some issues. Not so. Here is a great piece by Leftist Jab touching on a couple of these issues. Read that post for the details. Some people feared that Mulcair would break from working

END_OF_DOCUMENT_TOKEN_TO_BE_REPLACED

This and that for your Tuesday reading.- Chantal Hebert highlights how the Harper Cons are making a show of ignoring the needs of Quebec – and indeed making matters worse by the day:Persichilli’s recruitment also compounds what amounts to the party

END_OF_DOCUMENT_TOKEN_TO_BE_REPLACED

Olivia Chow’s announcement that she doesn’t intend to run for the NDP’s leadership looks to bring the race into much sharper focus. With Chow deciding not to run, there’s a wide open space for a candidate from the greater Toronto area. And while Peggy …

END_OF_DOCUMENT_TOKEN_TO_BE_REPLACED

On the front page of the Toronto Star yesterday, there was a small headline suggesting that Jack Layton’s widow, Olivia Chow, might be a possibility as the next NDP leader.I think she would be a good choice. She’s urban and chic, and one of the more pr…

END_OF_DOCUMENT_TOKEN_TO_BE_REPLACED

The buzz: Jack Layton‘s widow, Olivia Chow, will likely run for the leadership of the Federal NDP.  Bad political decision if the MP for Trinity-Spadina, Toronto, does. The world over, political widows often capitalize on the legacies of depar…

END_OF_DOCUMENT_TOKEN_TO_BE_REPLACED

Jack Layton’s state funeral service couldn’t have been more fitting.  Different kinds of music being played, from classical to Quebecois from Martin Deschamps to pop to a gospel rendition of a 60′s Youngbloods’ classic by Julie Michel. The musical selections also represented something Jack Layton strived toward, besides social democracy;  diversity.  In fact, not . . . → Read More: Jack Layton’s Funeral, Learning About Jack, The Family Man. A Few Words To Critics,

END_OF_DOCUMENT_TOKEN_TO_BE_REPLACED 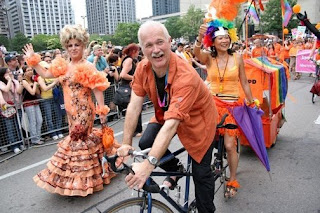 “Jack was the reason I started voting.”

Much has been said about NDP Opposition Leader Jack Layton over the past few days, but much more can be written about the legacy he left as a City of Toronto councillor. His son, Councillor Mike Layton, will be hard pressed to continue his work, and fight against deep cuts to core public services at Toronto’s City Hall this September.

Representing bicyclists, the homeless, those with HIV, union members, and cultural producers, Jack Layton was an activist for a just society, with the flexibility to adapt to the new realities of climate change, AIDS, housing shortages, labour policy and pay equity. Mentored as a student by ex-mayors John Sewell and David Crombie, his policies instituted from his 1982 election at City Hall became the foundation of a progressive Toronto; these same policies are currently under systematic attack through a new neo-conservative agenda, spearheaded by Mayor Rob Ford.

The Monday morning of his death, I awoke to find that R. Jeanette Martin had posted on Facebook a photo of Jack and Olivia riding on a tandem bicycle at Pride, clad in orange, surrounded by fluorescent drag queens, and tagged it This is our Royal Couple. This is how Jack Layton attended Pride, cycling in tandem with Olivia, emanating joy, pride and inclusivity, surrounded by the love of a community whose causes he championed far before it was fashionable. Olivia and Jack are, and were, a team that could not be beaten, and deeply in sync.

When I asked Jeanette permission to write about this photograph, she said that Jack would not have liked that his regulation headshot was published in the mainstream media to commemorate his death, that her office is still a wreck from culling her archives to find the best shot after the announcement, and that this is one of her favourite photos that she has ever taken as a freelance photojournalist. As her photo made the Facebook newsfeeds, the irony was not lost that our present mayor, Rob Ford, was present at Pride only in effigy, as dozens of people pointed out his absence in painted imagery and sign.

At 4 p.m., I biked to City Hall, and bought a dozen oranges in Chinatown, close to where Jack and Olivia once lived. A bouquet of oranges, rather than roses, seemed a fitting tribute to the one known simply as ‘Jack’, who advocated that the wealth of the commons, taken from our natural and social resources, was redistributed to enable each citizen to live with dignity, with the possibility of a brighter future. As I handed each of these oranges to my friends – artists, musicians, social justice activists, public sector employees- all proponents of city building – I asked them to say a few words, and photographed them with City Hall in the background. Most were speechless with grief.

Meanwhile, mourners chalked their condolences for an outpouring of affection covering the walls and ground in Nathan Phillips Square, writing well into the night. Jack Layton was a brilliant auctioneer with his red armbands and fast patter, but he auctioned for beneficial causes, such as the 519 Community Centre, not with the future resources of our country.

How do we commemorate a politician, activist and author who opened the first food bank, and wrote extensively about affordable housing issues in Homelessness: The Making and Unmaking of a Crisis? As suggested by the Toronto Star editorial this week, do we name a bicycle network, or re-name an existing Toronto space or service, such as Dundas Park, a homeless shelter, or, Huron Street, the short stretch of road leading to the house he shared with Olivia in Chinatown?

To honour his political legacy, I would suggest renaming a homeless shelter, and establishing a scholarship for developing homeless policy through donations through the Broadbent Institute. I am afraid if we name a commuter bicycle network, under the current regime, it will never come to pass.

Swinging his cane, Jack Layton may have hastened the progression of his cancer during his campaign for Prime Minister by leading the NDP to a landmark victory as a formidable opposition to the Conservative majority; it is moot to know, and something he hid from public view. He carefully chose not to share the prognosis, diagnosis or treatment of his spreading cancer so as not to influence the decisions of others during their course of treatment, and so as not to upset his supporters.

The unprovoked vitriol, in the National Post article by Christie Blatchford, hit a man when he was gone, when he was unable to defend himself. His legacy of orange hope will live on, long after her words will be forgotten. For Blatchford, his last letter was grandstanding with empty platitudes, but she has shown that the position of the new right focuses on a Canada whose soulless future does not include, or reflect, the common good it once served.

Rest in Peace, Jack. We will defend the house that Jack built.

This article is dedicated to my cousin, Ali, and her husband, Adrian, on their wedding day. May your relationship be as in sync as Jack and Olivia’s tandem ride.

END_OF_DOCUMENT_TOKEN_TO_BE_REPLACED

“Jack was the reason I started voting.” – Message written in chalk on Nathan Phillips Square wall Much has been said about NDP Opposition Leader Jack Layton over the past few days, but much more can be written about the legacy he left as a City of Toronto councillor. His

END_OF_DOCUMENT_TOKEN_TO_BE_REPLACED

“Jack was the reason I started voting.” – Message written in chalk on Nathan Phillips Square wall Much has been said about NDP Opposition Leader Jack Layton over the past few days, but much more can be written about the legacy he left as a City of Toronto councillor. His

END_OF_DOCUMENT_TOKEN_TO_BE_REPLACED

I’m still shocked by the untimely passing this morning of the Federal NDP leader, Jack Layton, at the age of 61. Canada has lost a great champion. Jack will be greatly missed by the many people whose lives he touched deeply. I’m one of th…

END_OF_DOCUMENT_TOKEN_TO_BE_REPLACED

Open Letter to my MP A blog post from Pearson’s Post (Link Here) Dear Olivia Chow,(Or, campaign staffer who is screening the emails she gets),Thank you for calling me tonight at home in the riding of Trinity-Spadina to ask if you could count on my volunteer help.As I said at

END_OF_DOCUMENT_TOKEN_TO_BE_REPLACED

Call me cynical, but MLA Blair Lekstrom’s exit from the BC Liberal caucus seems hardly genuine, possibly part of a carefully planned production that at its conclusion will see Premier Campbell exit government. In my view, he may have scripted his own e…