Chris Hedges states there is no choice in the 2020 US election if it is a choice between Trump and Biden: both are a vote for the consolidation of the oligarchy. Now that sums it up perfectly well. Mind you, it was the same in 2016. People in Germany felt

END_OF_DOCUMENT_TOKEN_TO_BE_REPLACED

Now that we’re in the era of the 45th republican administration the battles we fight are more basic.  Defending basic rights of people and defending the societal institutions that promote equality in society.  That is where we are now.  But back in the first term of the Obama presidency he

END_OF_DOCUMENT_TOKEN_TO_BE_REPLACED

I’m elated! Chelsea Manning is finally going to be released. Obama signed the commutation today. Wikileaks, the anti-secrecy organisation which published the diplomatic cables, has previously said its founder Julian Assange would agree to be extradited to the US if Mr Obama granted clemency to Manning. The White House said

END_OF_DOCUMENT_TOKEN_TO_BE_REPLACED

When US secretary of state, John Kerry, proclaimed that Israel had to choose – it could be a Jewish state or a democracy, just not both, Washington’s abrupt epiphany must have caught Justin Trudeau and Steffie Dion with their short pants down. If Washington can say the emperor has no

END_OF_DOCUMENT_TOKEN_TO_BE_REPLACED

Obama is leaving office and he’s clearly worried that the next president will ignore climate change and its effects on humanity. In order to stymie any damage that president Trump can do, Obama has passed a law that effectively bans ocean-based drilling for oil and gas in some areas. In

END_OF_DOCUMENT_TOKEN_TO_BE_REPLACED

Writing in Foreign Policy, Max Boot argues that “Trump’s ‘America First’ Is the Twilight of American Exceptionalism.” Boot’s essay begins with an extensive catalogue of the similarities between Obama’s policies and what Trump will likely deliver. He finds Obama a latter day Jefferson and sees in Trump a 21st century

END_OF_DOCUMENT_TOKEN_TO_BE_REPLACED

A friend sent me this article,  and  I am  adding my  answer…I don’t have permission to print out the article in its entirety, but  you  can  look for it  at FP..it’s short and succinct… WORTHY OF THEIR ANGER Our leaders’ … Continue reading →

END_OF_DOCUMENT_TOKEN_TO_BE_REPLACED

I’ve been holding back on commenting….reality has been so overwhelming and I feel as if, for the first time since possibly the War of  1812, that  the West is  slowly, inexorably being pulled into  another war, this time on home … Continue reading →

END_OF_DOCUMENT_TOKEN_TO_BE_REPLACED

The so-called Three Amigos met in Ottawa this week. It was nothing more than a public relations exercise. Nothing substantive could be resolved. The American, Canadian and Mexican leaders simply tried to ignore the problems their countries face. They certainly did not want to talk about the elephant in the room; Donald Trump. With Barack […]

END_OF_DOCUMENT_TOKEN_TO_BE_REPLACED

Everything in this article isn’t perfect, but these parts are: Alberta’s problem is twofold: Its oilsands have been buried by fracked American oil that is both higher-value and cheaper to produce, while longer-term they face marginalization in a world committed to weaning itself off carbon. So another pipeline isn’t needed; oilsands production won’t be expanding […]

END_OF_DOCUMENT_TOKEN_TO_BE_REPLACED

Here are three short articles which I wrote between 2011 and 2015 which sum up the Obama presidency, and the Obama vision and legacy. We should remember, those who cannot learn from history are doomed to repeat it. Let us review now the torturou…

END_OF_DOCUMENT_TOKEN_TO_BE_REPLACED

President Obama has cut funding for abstinence only sex education in the 2017 federal budget. The lack of adequate sex education has led to health crises and too many unwanted pregnancies (which is made worse by places lacking proper rights for women) in the USA. It’s so bad in some of the states that documentaries […]

The post Abstinence Only Sex Education Loses Funding in the USA appeared first on Things Are Good.

END_OF_DOCUMENT_TOKEN_TO_BE_REPLACED

“The American footprint in the war against ISIS is about to get bigger and for the first time U.S. ground troops are going to be based inside Syria” Here we go again. Obama was supposed to end all the wars. Afghanistan and Iraq are still ongoing wars and Obama has

END_OF_DOCUMENT_TOKEN_TO_BE_REPLACED

All 54 Republicans in the US Senate will vote against ratification of the Iran nuclear pact negotiated between Tehran and the P6 nations.  They’ll need 13 Democrats to vote with them and the deal is effectively stillborn.  Democratic senator Chuck Schumer could deliver the Republicans the votes they need. Israeli

END_OF_DOCUMENT_TOKEN_TO_BE_REPLACED

During the hour that it took the world’s elite G7 politicians discussing climate change to wander through an enchanting meadow of flowers in Germany’s Bavarian Alps earlier this week, at least 800 people died prematurely from the impact of air pollution, most of it caused by the burning of non-renewable

END_OF_DOCUMENT_TOKEN_TO_BE_REPLACED

During the hour that it took the world’s elite G7 politicians discussing climate change to wander through an enchanting meadow of flowers in Germany’s Bavarian Alps earlier this week, at least 800 people died prematurely from the impact of air pollution, most of it caused by the burning of non-renewable fossil fuels.

Wanting to show the world – particularly voters at home – that they care about the seven-million people a year dying from various pollution and carbon related causes, the leaders of the world’s richest countries, including Canada, signed a joint declaration calling for a global phasing-out of fossil fuels 85 years from now. 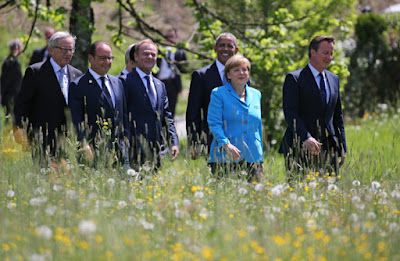 It’s unlikely that, during their deliberations in the picturesque Schloss Elmau at the foot of Germany’s highest mountain, anyone at the Summit reflected on the World Health Organization’s (WHO) report of a year ago that said in 2012 around seven million people died – one in eight of total global deaths – as a result of air pollution exposure.

Unfortunately, despite positive coverage in mainstream media in several countries, the section of the Summit dealing with climate change must be considered an over-blown failure.

German Chancellor Angela Merkel was disappointed that G7 members – largely because of opposition from Canada and Japan – wouldn’t agree to a commitment to a low-carbon economy by 2050. Instead, the G7 agreed to a full-blown, no-carbon economy, but not until 2100.

According to their declaration, the G7 countries say they intend to insist on greenhouse gas reduction at least in the upper 40 to 70 per cent range by 2050. There’s also a promise to cut emission by 17 per cent by 2020.

But, despite the tough talk, no nation-specific targets were set, and the G7Declaration is not binding.

Canada, living up to its long-held reputation as the world’s leading foot dragger on climate issues, balked at Merkel’s earlier proposal that G7 countries would eliminate carbon emissions by 2050.

Prime Minister Stephen Harper, who rejects scientific information on the threat of global warming, said Canada would reach the G7 targets through developing new technologies, not by reducing living standards.

Meanwhile, the G7 countries – in a farcical display of public relations – agreed on a binding two degree target for limiting global warming. Again, no timeframe was set, but the G7 group will take their declaration with them to Paris in December for the crucial UN Climate Summit.

Had they been more concerned about the hardship people around their world are experiencing – including people in some of their own countries – perhaps the Summit would have taken a more realistic, more dynamic approach to tackling the world’s most pressing problem.

Environmental groups were divided
in their opinions of the Summit.

Christoph Bals from the NGO Germanwatch said “the summit sends a strong signal for a successful climate agreement at the end of the year in Paris.”

But the development organization Oxfam said the outcome was inadequate. “If the G7 really want to implement their decisions, they must take concrete measures – such as promptly initiating a phase-out of harmful coal,” said Oxfam climate protection analyst Jan Kowalzig.

“Coal is the biggest single cause of climate change”, says Oxfam, “yet the G7 countries are still burning huge amounts, despite efficient, affordable, renewable alternatives being available. G7 coal power stations emit twice as much fossil fuel CO2 as the whole of Africa, and their contribution to global warming will cost Africa alone more than $43-billion per year by the 2080s . . . .”

In addition, despite the bravado in Germany, G7 countries have pledged US$8-billion per year in subsidies to expand fossil fuel production. This runs totally contrary to their claimed emission commitment positions.

In view of such contradictions, holding global warming to two degrees appears to be a monumental challenge.

In fact, expectations for a successful outcome in Paris have been waning, and the lack of any concrete action by the G7 further decreases expectations.

If the planet is to avoid large increases in global warming, massive actions never before accomplished by humankind will be necessary.

No doubt some progress will be made but, according to the independent Climate Action Tracker, the world’s current policies would result in global warming of 3.6 to 4.2 degrees Celsius by 2100. Even the current pledges of the G7 countries, if converted into effective policies, probably would not be enough for the world to stay under the target of keeping warming to 2 degrees Celsius.

BREAKING: Obama’s own Senators have just put the brakes on Fast Track and the TPP, potentially derailing the process for the foreseeable future. Slated for debate in the Senate this afternoon, President Obama’s Trade Promotion Authority Bill, better known as ‘Fast Track Legislation,’ was shut down before it even reached the

END_OF_DOCUMENT_TOKEN_TO_BE_REPLACED

It seems pretty clear that Barack Obama came into the presidency intending to extricate the United States from its foreign wars.  There were two at the time, Iraq and Afghanistan.  Today there are five. From Politico: Obama pledged in his 2013 inaugural address that “a decade of war is now

END_OF_DOCUMENT_TOKEN_TO_BE_REPLACED

Tossing ideas around yesterday I came to a “What If” moment.  What if, I wondered, Israeli prime minister re-elect, Benjamin Netanyahu, has destroyed Israel’s lifeline – the backing of the president of the United States of America. It’s been the American president, who alone controls his country’s veto at the

END_OF_DOCUMENT_TOKEN_TO_BE_REPLACED

Barack Obama didn’t pull any punches in giving his opinion about Alberta’s bitumen. Obama said he was still not sure whether he would approve Keystone, the $8-billion TransCanada Corp. project that would send oil from Alberta and the Northern U.S. to refineries in Texas. But he was more critical than