The media has been in a frenzy recently over the decision by former Saskatchewan finance minister, Andrew Thomson, to run for the NDP against Joe Oliver. According to Thomson: “My time in government, and we’ve seen the record of NDP governments — there is a strong attention to spending discipline,”

END_OF_DOCUMENT_TOKEN_TO_BE_REPLACED 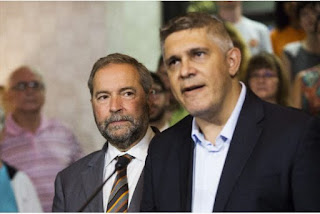 The media has been in a frenzy recently over the decision by former Saskatchewan finance minister, Andrew Thomson, to run for the NDP against Joe Oliver.
According to Thomson:

“My time in government, and we’ve seen the record of NDP governments — there is a strong attention to spending discipline,” he said.

“We are obviously committed to social spending, but at the same time are also committed to making sure budgets are balanced and that governments live within their means.”

Sounds good right?  This man claiming to have balanced the Saskatchewan budget, while stating that Oliver has failed in this endeavour?

It might be, if it were true.  But it isn’t. According to BJ Siekierski,  Thomson raided a contingency fund to give the appearance of a balanced budget.

“Are you confused about the state of the province’s finances? Uncertain whether Saskatchewan is running a) a balanced budget, b) a $500 million deficit or c)a $700 million deficit?” Bruce Johnstone, the financial editor of the Regina Leader-Post, wrote on March 24, 2007. “After this week’s provincial budget, you have every right to be confused. I certainly am and I’ve been covering these things for nearly 25 years.

“The Fiscal Stabilization Fund (FSF) was created in 2000-01 to stabilize the fiscal position of the Province from year to year and to facilitate the accomplishment of long-term objectives,” the 2007-08 budget reads.

A few days after the publication of Johnstone’s column, Brad Wall — then the leader of the Saskatchewan Party opposition — told the Saskatchewan legislature that Thomson and NDP not only failed to obtain the $75 million surplus they claimed, they also drained the FSF.

“They went from a $158 million surplus last year to a $701 million deficit this year, Mr. Speaker. They drained $500 million, a half a billion dollars, from the Fiscal Stabilization Fund,” Wall charged.

The media is calling the Oliver/Thomson bout, the battle of two finance ministers, when in fact, it is the battle of two deceptive finance ministers.
Personally, I think the idea of balancing budgets is over-rated.  Instead, I agree with most economists, that if you grow the economy, budgets will balance themselves.
Neither Oliver nor Thomson got that message.
Andrew Thomson’s Record Was Much Worse
As finance minister in the Saskatchewan NDP government of Lorne Calver, Thomson cut funding to education, forcing many municipalities to increase their property taxes.
He blamed the education boards, suggesting that they should be spending their reserves.

The minister’s comments have justifiably frustrated officials in these regions, especially the fact that he’s accusing them of hoarding money. If the minister wants to talk about hoarding money and replenishing reserves, he need only look in the mirror. After all, it was his NDP government that has socked away nearly $700 million dollars in its so-called rainy day Fiscal Stabilization Fund for use in the year leading up to the next provincial election. Most of this money came right from oil producing regions like South East Saskatchewan, where residents are now facing increased education property taxes all because the minister is hoarding money in his own reserves and failing to fully fund the increased costs of education.

We now know he raided his government’s reserves, to give the appearance of a balanced budget.  The rest was used in self glorification television ads.

It’s funny – Andrew Thomson didn’t bother to mention this hidden tax hike in his recent half-a-million dollar television ad campaign. Recently, a reporter asked Andrew Thomson why he had to appear in the NDP’s budget commercials. He said it was because “it’s my budget.”

Mr. Thomson, like the NDP, has forgotten something very important. It’s not his budget. It’s not even his money. That money belongs to you, the people of Saskatchewan.

Yes.  He cut funding to education, so he could look good on television.

With the writing on the wall, Thomson decided not to run in the 2007 election.  The NDP were thrown out of power by the Saskatchewan Party, made up of former Liberals  and Conservatives.  In the 2011 election, the NDP fortunes fell even further, as they were reduced to just nine seats.

Andrew Thomson has to shoulder the blame for at least some of that.

Saskatchewan NDP Shows Where the Brand Has Gone Wrong

In 2012, Journalist John W Warnock wrote a piece:  Whatever Happened to the Saskatchewan NDP?

From 1944 through 2007, politics in Saskatchewan was dominated by the Co-operative Commonwealth Federation (CCF) and its successor the New Democratic Party (NDP). But the NDP was soundly defeated by Brad Wall’s Saskatchewan Party in 2007 and routed in 2011. Today they hold only nine seats in the legislature.

He contributes their failure, and rightly so, on their decision to move the party to the right.

Obviously, the Saskatchewan NDP needs to seriously re-evaluate the political direction it has taken since 1991. The move to the right to embrace the neoliberal model has been a failure. Thus it is a good time for a book of serious papers which examine ongoing problems and set out an alternative policy direction. The child poverty rate in Saskatchewan stands at 19.6 percent, tied with BC as the highest in Canada. James Mulvale and Kirk Englot explain how a progressive provincial government could implement a feasible strategy for poverty reduction.

The NDP had failed on every issue, from healthcare to poverty.  From education to the environment.

This problem is not limited to Saskatchewan, however.
In Ontario, last election, NDP leader Andrea Horvath, angered her base when she ran on a platform that was right of the Liberals.
Says Roger Annis

This follows elections last year in Nova Scotia and British Columbia that were marked by the drift to the right of the NDP and electoral disappointments similar to what the party suffered in Ontario.

Things were so bad in Nova Scotia, that former MLA, Howard Epstein, wrote a book subtitled:  If the NDP can’t differentiate itself from other parties, should it exist?
The NDP is unpopular in Manitoba, and in New Brunswick they supported the police crackdown of Mi’kmaq led protests against fracking.
They won a majority in Alberta, in part by distancing themselves from the anti-oil activists.  I don’t think this will spell more support for the federal NDPs in the province.
Now the federal party has chosen a Neoliberal leader with enough right-wing baggage to guarantee that the party will never again represent social democratic principles.
By moving to the right, they have opened up the left,  allowing Justin Trudeau’s Liberals and Elizabeth May’s Green Party, to move in.
CNNi Report, offers a reason why the NDP chose Thomas Mulcair to lead them.

Their fear of Harper is too profound and they fear that the way Conservatives decimated the Liberals, now it would be the turn of the NDP to be pulverized.

They wanted a scrapper to challenge Harper and protect them from destruction.  However, if they are pulverized, it won’t be by the Conservatives, but by an attack from within.
The death of a thousand cuts, with Mulcair delivering the final, fatal blow.

END_OF_DOCUMENT_TOKEN_TO_BE_REPLACED

The media has been in a frenzy recently over the decision by former Saskatchewan finance minister, Andrew Thomson, to run for the NDP against Joe Oliver. According to Thomson: “My time in government, and we’ve seen the record of NDP governments — there is a strong attention to spending discipline,”

END_OF_DOCUMENT_TOKEN_TO_BE_REPLACED

You can relax. I don’t know where you got your information, but our best scientists don’t currently think the earth will be destroyed by the sun. In about 4-5 billion years, our sun will enter the red giant phase of … Continue reading →