END_OF_DOCUMENT_TOKEN_TO_BE_REPLACED

In Ontario (and elsewhere in Canada), race has been a factor in determining who rightfully belongs here, and who is, by default, an intruder to be wary of. Betraying Canada’s mantra of multiculturalism, a constant cloud of suspicion follows dark-skinned Canadian citizens every day. Whether they are walking while Black,

END_OF_DOCUMENT_TOKEN_TO_BE_REPLACED 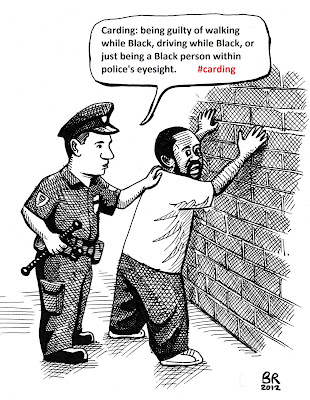 In Ontario (and elsewhere in Canada), race has been a factor in determining who rightfully belongs here, and who is, by default, an intruder to be wary of. Betraying Canada’s mantra of multiculturalism, a constant cloud of suspicion follows dark-skinned Canadian citizens every day. Whether they are walking while Black, driving while Black, flying while Black, banking while Black, bussing while black… People who look Aboriginal or Arab tell similar stories of being presumed risky guilty before being proven innocent.

All over Canada (not just in Toronto), police regularly stop law-abiding citizens in the hopes of finding a needle in a haystack gathering evidence or intelligence to supposedly reduce crime. There is no evidence to support this race-based targeting actually works, but the carding custom continues.

Carding is the practice by which law enforcement systematically stop, interrogate and document (mostly) dark-skinned citizens who are committing no crime and display no evidence of having committed a crime.

They coined the practice “stop-and-frisk” in the USA. Whatever the terminology employed, it’s called “racism”.

Notably, Ontario’s “activist” Premier Kathleen Wynne has sidestepped the issue. Wynne’s awkward silence follows a pattern of favouring her fetish demographics. Liberal Party leader Justin Trudeau did one better: his cronies recruited former Toronto Police Chief and carding defender Bill Blair to run in the upcoming federal election. It will take tornado of spin for the “multiculturalism-inventing” Liberals to square that circle: Trudeau has been travelling the country while waving a banner of “fairness.”

In the End, we will remember not the words of our enemies, but the silence of our friends.

One wonders when these elected leaders will frog-leap onto the right side of history.

At first, former Progressive Conservative party leader and current Toronto Mayor John Tory didn’t seem bothered by bigotry behind the badge. In a stunning about-face enlightened evolution, Mayor Tory announced the end of carding in his city this week. As the congratulatory backslapping spread across the Center of the Universe Hogtown, the rest of the province and the rest of the country is left eating dust. For us, carding carries on.

Never put your hands up until the puck’s in the net and the goal light is on. Let’s see what happens in concrete terms with #carding #tps

Journalist Desmond Cole’s courageous and personal account of unrelenting and unwarranted police interrogations describes incidents in St. Catharines and Kingston. Neither are covered by this week’s partial victory.

It was in 1956 that Ontario became the first province to enforce the Fairness Accommodation Practices Act, thus granting new equality rights to its Black and Asian residents. For the first time in Canadian history, racial equality was declared a civil right, and “racial discrimination in was confirmed as illegal“. Following Ontario’s lead, legislative civil rights flowed outward from coast to coast.

Today, since our provincial leaders are not willing to defend the most vulnerable citizens and uphold the Charter of Rights and Freedoms, individuals have to band together to force the issue. Just as Rosa Parks Bromley Armstrong and Ruth Lor served as the test cases for racial equality 50 years ago, Rohan Roberts has stepped up to the plate to challenge carding in Ontario. In what could be a landmark case, Roberts filed Human Rights complaint against Toronto Police. The defendants have access to a bottomless till of taxpayer dollars to fund their retort. Roberts is a working class guy. In the pursuit of justice writ large, Mr. Roberts will sacrifice himself and his financial security in a bid to realign law enforcement with the values we hold dear. (I’ve launched a crowdfunding drive to help defray his legal bills.)

To eradicate carding in Canada, this case must be heard in the highest courts. Judges must remind all citizens, including mayors, premiers and prime-ministerial hopefuls that equality and fairness are more than filatures for flowery speeches. Mayor John Tory was pulled, prodded into doing the right thing. The first domino has fallen. But we’ve not yet reached the promise land.

The adventures of a Franco Ontarian Viz Min Woman in Ottawa.
END_OF_DOCUMENT_TOKEN_TO_BE_REPLACED

In Ontario (and elsewhere in Canada), race has been a factor in determining who rightfully belongs here, and who is, by default, an intruder to be wary of. Betraying Canada’s mantra of multiculturalism, a constant cloud of suspicion follows dark-skinned Canadian citizens every day. Whether they are walking while Black,

END_OF_DOCUMENT_TOKEN_TO_BE_REPLACED

The National Capital Region will soon welcome a new CFL football club. This will be the third time the team rises from its ashes: the Ottawa Rough Riders went bankrupt in 1996, and again in 2006 under the Renegades moniker. At the time, Franco-Ontarian football fans (and those in nearby

END_OF_DOCUMENT_TOKEN_TO_BE_REPLACED

The City of Detroit has become the butt of jokes for its upside down procurement priorities. The downtrodden Motor City has made a series of poor investments over several mayoral tenures. The most famous of which was Mayor Kilpatrick, a charming showman who never met a camera he didn’t like.

END_OF_DOCUMENT_TOKEN_TO_BE_REPLACED

Download: earthgauge-podcast-april18-2013.mp3 This week we celebrate Earth Day and look at why cities are so important in the fight against climate change. I have two features on the program today: Interview with Jed Goldberg, president of Earth Day Canada Presentation by Alex Wood of Sustainable Prosperity from the City of Ottawa

END_OF_DOCUMENT_TOKEN_TO_BE_REPLACED

On Earthgauge Radio this week, it’s Earth Day! I’ll be speaking with the president of Earth Day Canada, Jed Goldberg. We talk about what is being planned for this year’s event on April 22 (Monday) and we discuss the role of Earth Day activities at a time when many environmental

END_OF_DOCUMENT_TOKEN_TO_BE_REPLACED

This article was published in The Huffington Post Canada. Read it here and post a comment! This week is momentous for legions of moms and women in general: the “Big O” is comin’ to town. Yes, the former Queen of Television, the one then-Senator Obama called “possibly the most influential

END_OF_DOCUMENT_TOKEN_TO_BE_REPLACED

This week on Earthgauge Radio, we’re talking about climate change and the protection of Canadian waterways. I have 3 features on the program today: Radio EcoShock‘s broadcast of a speech by the top U.K. climate scientist Kevin Anderson of the Tyndall Centre for Climate Change Research My interview with John Bennett, Executive Director of the Sierra Club of […]

END_OF_DOCUMENT_TOKEN_TO_BE_REPLACED

First, I am sorrow-filled for yet another young person who has taken their own life because of bullying. The message that bullying is not acceptable and can have disastrous impacts – well, it’s not getting through. Not well enough, anyhow. As a Dad, this is becoming increasingly difficult to watch.

END_OF_DOCUMENT_TOKEN_TO_BE_REPLACED

Download: charles-hodgson-ottawaghgs.mp3 Click the audio player to hear my interview with Charles Hodgson of Ecology Ottawa who produces the excellent blog climateottawa.ca. Right click here to download the interview. We discuss the recent City of Ottawa greenhouse inventory and what is going on at city hall with regard to Ottawa’s

END_OF_DOCUMENT_TOKEN_TO_BE_REPLACED

[Written Sunday, Feb 19 2012] Ottawa Fashion Week is a growing staple in the nation's capital, which brings together local residents and the burgeoning home-grown fashion industry in a unique style. Having attended last year, I noticed the mix of cultural backgrounds, shapes and sizes on both the designer and