This and that for your Sunday reading.- Michael Bader argues that a cynical view of politics represents the most important barrier to progressive victories:Cynicism is a corrosive force in our politics and culture, but one that is invisible to us beca…

END_OF_DOCUMENT_TOKEN_TO_BE_REPLACED

Recently, Justin Trudeau has come under fire for remarks he made suggesting that some small business owners used their concerns to avoid paying taxes.  He did not suggest all, but that didn’t stop the media and his opposition from jumping on the bandwagon. However, leading the charge is a group

END_OF_DOCUMENT_TOKEN_TO_BE_REPLACED 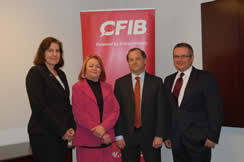 Recently, Justin Trudeau has come under fire for remarks he made suggesting that some small business owners used their concerns to avoid paying taxes.  He did not suggest all, but that didn’t stop the media and his opposition from jumping on the bandwagon.

However, leading the charge is a group called the Canadian Federation of Independent Business.  (Former president shown above with NDP members, including Brian Topp).

However, in 2011, David Climenhaga exposed this group for what they really are:

Why does the so-called Canadian Federation of Independent Businesses push a far-right agenda that benefits the country’s richest corporations and individuals at the expense of independent businesses?

Well, it’s not that complicated, really. Like the Canadian Taxpayers Federation, which doesn’t represent the interests of Canadian taxpayers, it’s fair to say based on its actual behaviour that the CFIB is a typical example of pure, unadulterated AstroTurf pretending to serve the interests of one group while actually working against them.

In 2012,  CFIB’s president, Christine Swift (above with Topp),  was forced to step down because of her involvement in a group called Working Canadians.  Don’t let the name fool you.  This is actually another AstroTurf group, whose primary stated goal is to diminish the role of unions.

Since when were the NDP anti-union?  I know in Quebec that Mulcair was, and it is he who suggested that the party move away from them, but still.  It’s rather odd that they would be backed by an anti-union group, although everything about this party is odd these days.

That would certainly explain why most of their attacks have been against Justin Trudeau, despite the fact that it’s the NDP who actually benefit from union support.  The only anti-NDP  ad is against the B.C. Party, but they have left Mulcair alone.

Maybe it has something to do with this.

She suggested that she didn’t think he would have electoral success, but given past polls, why are they still leaving Mulcair alone?

One of their television ads is eerily similar to those run by the Conservatives.  They use the cherry picked “budgets will balance themselves” and a short clip from Trudeau’s teaching days.

Swift’s replacement, Dan Kelly, is also right-wing and has even called on businesses to boycott the United Way and supports the use of temporary foreign workers.

The Proof is in … Well the Proof

Ok.  So you look at the above and might say that the links between the NDP and CFIB are weak, except that the NDP themselves have admitted to courting their influence.

Last week’s exchange in the House is just one small example of how the CFIB’s influence – with all parties – has grown substantially, particularly the NDP, one expert says.  From question period.

“The political parties are looking at the CFIB as the only credible organization that deals with small and medium sized businesses. That’s an approach the NDP has been taking in the past few years,’’ says Gilles LeVasseur, a business and law professor with the Telfer School of Business in Ottawa.

“They’ve been dealing with unions. So now they (the NDP) are shifting toward business people because they see that they’ve missed out on that opportunity. You have to understand that the NDP is doing that because they have to show they can govern the country, and by governing the country you also need to have business on your side,’’ said LeVasseur, who was a member of the CFIB for a year about a decade ago.

They’ve been dealing with unions alright.

So the CFIB and the offshoot Working Canadians are overtly attacking Justin Trudeau with money from “small businesses”, and CFIB has an NDP MP as a former member.  Did they draft Mulcair’s business tax strategy that benefits the rich?

They have set up Justin Trudeau and once again the media has become complicit.  Don’t you just love the state of our democracy?

Trudeau is right to challenge them.  He has heard the ads and he knows the players. He could pull an #NDPTruthTeam on them and ask why the NDP was being backed by a group that wants to stop money going to the United Way.  Or is a strong supporter of the Temporary Foreign Workers program.  Or wants to diminish the role of unions.

END_OF_DOCUMENT_TOKEN_TO_BE_REPLACED

Recently, Justin Trudeau has come under fire for remarks he made suggesting that some small business owners used their concerns to avoid paying taxes.  He did not suggest all, but that didn’t stop the media and his opposition from jumping on the bandwagon. However, leading the charge is a group

END_OF_DOCUMENT_TOKEN_TO_BE_REPLACED

Miscellaneous material for your mid-week reading. – Sheila Block points out the problems with the spread of low-paying, precarious jobs. And PressProgress fact-checks the CFIB’s attempt to make as many workers’ lives as precarious as possible by suppressing minimum wages and standards. – But Sara Mojtehedzadeh reports that Ontario’s provincial

END_OF_DOCUMENT_TOKEN_TO_BE_REPLACED

Shorter Corporatists to Fleece the Irrelevant Beggars trying to avoid a living wage for Alberta: Has anybody pointed out that if we ensure that the hungry have food, some of them might gain weight? That’s why we consider it more responsible to force-feed them diet pills.

END_OF_DOCUMENT_TOKEN_TO_BE_REPLACED

Assorted content for your weekend reading. – Thomas Walkom points out that with oil prices in free fall, we’re now seeing the inevitable consequences of the Cons’ plan to build an economy solely around unstable resource revenues: Sensible countries try to lessen their dependence on volatile commodities. Canada, whose economy

END_OF_DOCUMENT_TOKEN_TO_BE_REPLACED

This and that for your Thursday reading. – George Monbiot comments on the far more important values we’re endangering in the name of constant financial and material growth: To try to stabilise this system, governments behave like soldiers billeted in an ancient manor, burning the furniture, the paintings and the

END_OF_DOCUMENT_TOKEN_TO_BE_REPLACED

Miscellaneous material for your mid-week reading. – Duncan Cameron discusses how Canada can respond to being stalled economically: In 2011 median earnings in Canada were $30,000. That means one-half of Canadian workers earned less than $30,000. What is more to the point is that earnings in 2011 were $1,800 below

END_OF_DOCUMENT_TOKEN_TO_BE_REPLACED

Shorter Your Corporate Overlords: It turns out most of the information we supplied to get a free pass on importing disposable foreign workers was laughably inaccurate. And we’re outraged that anybody was foolish enough to believe us.

END_OF_DOCUMENT_TOKEN_TO_BE_REPLACED

This and that for your weekend reading. – James Meek observes that decades of privatization in the UK have eliminated public control over housing and other essential services – and that privatization takes far more forms than we’re accustomed to taking into consideration. And Rick Salutin offers his take on

END_OF_DOCUMENT_TOKEN_TO_BE_REPLACED

Here, on the conflict between Canadian values including a reasonable quality of life and freedom from an employer’s total control, and the explicitly anti-Canadian message of employers seeking to expand and exploit a temporary foreign worker underclass. For further reading…– Once again, Dan Kelly’s comments were caught by PressProgress, while

END_OF_DOCUMENT_TOKEN_TO_BE_REPLACED

Yesterday, I took a look at the Temporary Foreign Worker Program (TFWP) and how it helps enforce labour discipline on all workers, and low-wage workers in particular. Today, I want to explore the migration side of the migrant worker equation. The context of migration not only makes it easier for

END_OF_DOCUMENT_TOKEN_TO_BE_REPLACED

Miscellaneous material for your mid-week reading. – Angella MacEwen takes a look at the large numbers of unemployed and underemployed Canadians chasing a tiny number of available jobs. And Carol Goar calls out the Cons and the CFIB alike for preferring disposable foreign workers to Canadians who aren’t being offered

END_OF_DOCUMENT_TOKEN_TO_BE_REPLACED

This and that for your Tuesday reading. – Livio Di Matteo discusses the wasted opportunity to improve Canada’s health care system through concerted national investments. And Ryan Meili asks who will provide future direction now that the Cons have scrapped the Health Council of Canada: Now we see the federal

END_OF_DOCUMENT_TOKEN_TO_BE_REPLACED

Assorted content for your weekend reading. – Justin Fox questions whether traditional studies tracking the distribution of wealth by quintiles do much good when the most obvious economic faultline is between the (give or take) 1% and everybody else: Something really dramatic is going on up there in the top

END_OF_DOCUMENT_TOKEN_TO_BE_REPLACED

At a time when the Canadian Federation of Independent Business (CFIB) is advocating an end to “defined benefit” (DB) pensions, the latest retirement index suggests that the alternate “defined contribution” (DC) pensions are struggling and will not produce the kind … Continue reading →

END_OF_DOCUMENT_TOKEN_TO_BE_REPLACED

After analyzing “research reports” issued by the Fraser Institute or the Canadian Federation of Independent Business (CFIB), I usually end up shaking my head in disbelief. Do they really need to so grossly distort and manipulate the statistics to make their arguments? The answer is invariably “yes”.  That’s because the

END_OF_DOCUMENT_TOKEN_TO_BE_REPLACED

What is it with right-wing politicians and tobacco, anyway? Below: Don’t worry, she won’t have to pay higher taxes for that cigarette. The leaders of all Alberta parties but one seem committed to ending smoking by young Albertans. The sole holdout? It’s the Wildrose Party, led by former Fraser Institute