END_OF_DOCUMENT_TOKEN_TO_BE_REPLACED

To Calgarians, the city is starting to feel like a punching bag. Its primary industry suffers one body blow after another. Oil prices crashed at the end of 2014 as surprising growth in U.S. shale production boosted supply while OPEC refused to cut its output. Major investment firms, finally recognizing

END_OF_DOCUMENT_TOKEN_TO_BE_REPLACED

On November 18th of last year, Calgary held a plebiscite which attracted an impressive 305,000 voters. The question on the ballot was whether or not the city would host the 2026 Winter Olympic Games. The answer was a decisive no, despite the Olympic opponents having far less money at their

END_OF_DOCUMENT_TOKEN_TO_BE_REPLACED

You might not have seen video of the dramatic flash flooding that swept the historic town centre of Elliott City, Maryland, but that doesn’t matter. Perhaps you didn’t see the devastation of New York City and the Jersey Shore by Hurricane Sandy. Maybe you’ve been in a coma for the

END_OF_DOCUMENT_TOKEN_TO_BE_REPLACED

PHOTOS: St. Albert’s renowned city hall, designed by Canadian architect Douglas Cardinal, formally known as St. Albert Place. Below: The three candidates for mayor who are now now officially in the race, Cathy Heron, Cam MacKay and Malcolm Parker. ST. ALBERT, Alberta Is it just my imagination, or does the

END_OF_DOCUMENT_TOKEN_TO_BE_REPLACED

PHOTOS: Cool, man, it’s the Summer of Love! Alberta’s conservatives, grooving to the beat of the Jason Kenney Experience, say: Tune in, turn on, and (if you’re a progressive voter) drop out! (Photo found on the Internet; source not indicated.) Below: Pollster Quito Maggi, United Conservative Party leadership hopeful Jason

END_OF_DOCUMENT_TOKEN_TO_BE_REPLACED

PHOTOS: The magnificent Texas State Capitol in Austin – taller that the U.S. Capitol in Washington! Below: The interior of that Texas dome and some musicians making the scene in Austin, which is not only warmer than Edmonton, it’s more liberal too, and the sort of thing I had in

END_OF_DOCUMENT_TOKEN_TO_BE_REPLACED

PHOTOS: The scene abroad N. Murray Edwards’ yacht imagined. Actual Canadian bitumen billionaires and their onboard guests may not appear exactly as illustrated. Below: The real N. Murray Edwards, Prime Minister Justin Trudeau aboard a helicopter, although not the Aga Khan’s, Opposition Leader Rona Ambrose in a yacht harbor, and

END_OF_DOCUMENT_TOKEN_TO_BE_REPLACED

Former Conservative Prime Minister  Stephen Harper apparently isn’t satisfied with having destroyed a lot of wonderful and important things in Canada. Now he has signed on with Dentons, the world’s largest elite law firm, to spread his dark viewpoints around the globe. Dentons proudly announced Monday that Harper – who does

END_OF_DOCUMENT_TOKEN_TO_BE_REPLACED

Former Conservative Prime Minister  Stephen Harper apparently isn’t satisfied with having destroyed a lot of wonderful and important things in Canada. Now he has signed on with Dentons, the world’s largest elite law firm, to spread his dark viewpoints around the globe.

Dentons proudly announced Monday that Harper – who does not have a legal degree – and his new consulting company will work from its Calgary office. 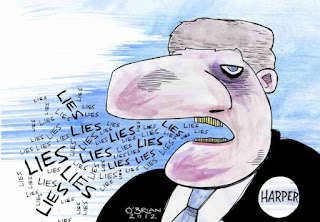 For Harper, the appointment is his reward from the corporate set for many years of stalwart service. He will now be able to stuff his pockets with greenbacks and 76-cent Canadian dollars.

The recently resigned Calgary MP will no doubt stick a Canadian flag on his suitcase as he peddles his anti-social ideology. Hopefully, this will be Harper’s final insult to our national pride.

Dentons is like an octopus. It has more than 7,200 lawyers in over 50 countries, and seems to be constantly expanding.

In easily translatable jargon, Dentons  said Harper has teamed up with the firm to provide clients with “advice on market access, managing global geopolitical and economic risk, and maximize value in global markets” – i.e. postulating himself based on the credibility he gained during none years as PM.

The Donald Trump of the legal set

“Dentons is the Donald Trump of the legal vertical,” writes legal expert and columnist Mark A. Cohen. “The firm is brash, bigger-than-life, and something entirely different. It receives a disproportionate amount of press because it is always doing something that drops jaws.”

The firm surprised the legal/business world by forming a partnership with a huge Chinese firm closely tied to the Communist Party. They employ more than 6,000 lawyers that are working on hundreds of projects, both inside the country and internationally.

Dentons isn’t fussy about which companies it represents in litigation. It works for Wal-Mart Stores, Monsanto, Citigroup, Duke Energy, Bank of America, Barclay’s Bank, Wells Fargo, and others.

Harper’s cold personality could damage his one-on-one work for Dentons. The former PM  once famously said: “I can’t even get my friends to like me.”

It is outrageous that a former Prime Minister is able to join a massive, influential international corporation such as Dentons when his seat in Parliament has barely cooled.

Dentons is deeply involved in all kinds of wheeling and dealing at the highest levels around the world. Part of its success is based on collecting inside information on corporations and governments.
There are few legal constraints for Harper in his new job. Canada’s Lobbying Act  prevents Harper from being directly involved in lobbying the Canadian government for five years.

Having been Prime Minister for more than nine years, Harper is aware of what is supposed to be confidential information concerning corporations in Canada and what are supposed to be secret arrangements among foreign governments.

Harper will claim he will not reveal privileged information, but there is no way of knowing whether he will break his word. Just imagine – if he was hosted by the King of Saudi Arabia and seeking approval for some energy-related project – would he not be tempted to spill the beans about what he knows about the fossil fuel industry worldwide?

Harper will be a medium-sized fish at Dentons, but he can help the firm in countries where he has good relations with government leaders, and on some issues.

Given Harper’s record of spending little money on fighting climate change, he could work with government clients on how to avoid spending millions on carbon reductions and he probably could help corporate clients avoid carbon penalties.

Instead of marketing his skills through Dentons, it would have been more appropriate for Harper to get involved in academia. He would have been welcomed at the University of Calgary, where a group of professors and some students established the influential right-wing “Calgary school.”

And Harper doesn’t need the money. Currently 57, he is receiving $127,000 in annual pension payments. When he turns 60, the amount will increase to $134,000 per year. The Canadian Tax Federation says that Harper’s MP pension pay would add up to roughly $5.5 million up to age 90 (factoring in for inflationary increases to the payments).

END_OF_DOCUMENT_TOKEN_TO_BE_REPLACED

This column ran in The National Post on March 24, 2016. After weeks of trying “natural” extracts and homemade remedies like smoothies cut with ginger root and horseradish to cure a suspected case of meningitis, 19-month-old Ezekiel Stephan’s …

END_OF_DOCUMENT_TOKEN_TO_BE_REPLACED

A billionaire is moving away from Calgary and we should all be worried, the newspapers tell us. Postmedia newspapers reported recently that nameless sources are saying oil billionaire and Calgary Flames co-owner Murray Edwards is “switching hi…

END_OF_DOCUMENT_TOKEN_TO_BE_REPLACED

Here in Calgary we have been enjoying weather that, for the season, can only be described as balmy. Like last year, February has been more spring than winter.

One of the reasons, of course, is our warming planet. The figures are in for January and t…

END_OF_DOCUMENT_TOKEN_TO_BE_REPLACED

So says a Calgary homeless person in answer to those expressing outrage over the assistance being given to the Syrian refugees.Looks like the extreme right-wing will have to find another target for its hateful abuse.Recommend this Post

END_OF_DOCUMENT_TOKEN_TO_BE_REPLACED

Update, Oct. 17.   A new poll in Calgary Centre has the Liberals and Conservatives neck-and-neck.  Strategic voters could make the difference. Calgary Conferation,Calgary Skyview,Calgary Centre This election has a few more surprises than most, and the fracturing of the Conservatives’ fortress in Calgary might be one of them. A news

END_OF_DOCUMENT_TOKEN_TO_BE_REPLACED

Calgary Conferation,Calgary Skyview,Calgary Centre This election has a few more surprises than most, and the fracturing of the Conservatives’ fortress in Calgary might be one of them. A news story from the CBC reports that three Calgary ridings are surprisingly competitive: Calgary Centre, Calgary Confederation, and Calgary Skyview. This is also the

END_OF_DOCUMENT_TOKEN_TO_BE_REPLACED

Update, Oct. 17.   A new poll in Calgary Centre has the Liberals and Conservatives neck-and-neck.  Strategic voters could make the difference.

This election has a few more surprises than most, and the fracturing of the Conservatives’ fortress in Calgary might be one of them.

This is also the interpretation of Eric Grenier over at threehundredeight.com.  His current projections for the Calgary ridings paint three ridings red: Calgary Centre, Calgary Confederation, and Calgary Skyview

The striking thing is not merely that Grenier’s a projecting these three seat for the Liberals.  It is also seeing weakness in other ridings such as Signal Hill and Forest Lawn.

For Calgary voters who want to vote strategically to defeat Harper, however, the message is clear.  Vote Liberal.
Some recent posts:
END_OF_DOCUMENT_TOKEN_TO_BE_REPLACED

When Harper appointed Carson as a top adviser, the fraud used his position to undermine research into climate change. About the only part not worth reading is the line saying “There is no easy way to cut emissions and grow the economy”, and now you’ve read it, and can recognize