It should come as no surprise that bike lanes are safer than merging bicycle traffic with heavy metal boxes on wheels. A new study from the University of British Columbia confirms this and goes one step further by analysing which type of bike lane is in the safest. Well designed

END_OF_DOCUMENT_TOKEN_TO_BE_REPLACED

As a cyclist the fact that bicycle infrastructure helps business makes senses to me. Bike lanes encourage more cyclists which can bring more people to an area, drivers on the other hand seem to just keep driving though. I hope the backwards thinking politicians in Toronto see this study since

END_OF_DOCUMENT_TOKEN_TO_BE_REPLACED

The worst mayor in Canada hates people who don’t drive automobiles and thinks cyclists deserve to die. The mayor of Toronto wants to remove bike lanes (while every smart city is installing more) despite the fact that the number of cyclists has increased. So where’s the good news you ask?

END_OF_DOCUMENT_TOKEN_TO_BE_REPLACED

“It is clear that there is a program to eliminate the public from our great city.” – Kim Fry, the 11th deputant during the Core Service Review at Toronto’s City Hall on Thursday July 28 For a penny-pinching populist, Mayor Rob Ford’s policies are very expensive. Since his October 25th

END_OF_DOCUMENT_TOKEN_TO_BE_REPLACED 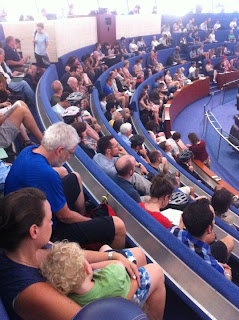 “It is clear that there is a program to eliminate the public from our great city.”

For a penny-pinching populist, Mayor Rob Ford’s policies are very expensive. Since his October 25th election, he has spent over $533 million in a strange sibling rivalry against his arch nemesis, ex-Mayor David Miller. During Miller’s time in office, Rob Ford was the least respected councillor, and was relegated to the benches during Miller’s confabs with his handpicked, executive council. In retaliation, cribbing from his tactics as high school football coach, Ford has crafted his defensive lineup – an executive council of six strong ‘yes’ men to systematically take apart Toronto’s public infrastructure – which Miller intended to be his legacy – through cutting core services. Ford is like a younger kid brother knocking down the carefully placed building blocks of his brother’s toy castle because he does not know how to build a city of his own design or imagination.

Select items from a spreadsheet itemizing Mayor Ford’s expenses to the City of Toronto? Canceling Transit City, initial penalties of $179 million, removing bike lanes, $469,000, bailing out an under-used arena, $43.4 million, subsidizing an underused ski lift in the ward of his ally, Councillor James Pasternak, $2 million, and the loss of revenue from the Land Transfer Tax and Vehicle Registration Tax, $204 million and $50 million respectively. Another $100,000 was spent to hire a TTC consultant, and $3 million to hire KPMG, an external consulting firm- both of these expenses are part of city councillor’s jobs, and so are redundant.

While ex-Mayor Miller left a $375 million surplus, Mayor Ford is dangerously close to spending money equivalent to the $774 million budget deficit he wanted to balance by 2012. Left unchecked, these expenditures will almost double the projected 2011 deficit within his first year of office, showing the true cost of privatization. With over three years left in his term, he huddles with his brother, Doug, as his closest advisor, quietly strategizing during City Council meetings, cautioned by his rightwing consultants to remain tightlipped with the media.

Ford’s first agenda item was to hire consultancy firm, KPMG, to perform a core service review. When KPMG’s results were made public, the results backfired for Team Ford. 96% of services are mandated by the federal government, there was no gravy, and the report unintentionally highlighted that the previous surplus left by ex-Mayor Miller was an act of financial wizardry. Apparently, the left can be bean counters, too.

On July 28th, there were over 300 deputations at City Hall on the agenda, with irate citizens decrying these cuts, and police at the council chamber’s door; the new executive council will make the final decision regarding these core service cuts in September. Bowing under thousands of emails of public pressure to attend the deputations- Mayor Ford did not sit in for the first round – he decreed that they take place over a marathon 20 hours. The deputations have become a kangaroo court, a sham procedure, to get them out of the way of his city fire sale, as ‘efficiencies’ are found, cutting core services from the elderly, children, those with HIV, caretakers, bicyclists, and at risk youth, including a program that funds 685 student nutrition programs, 42 AIDS prevention projects and 38 community drug prevention programs. Although police refused access to City Hall’s green roof for his picnic, activist Dave Meslin is part of hundreds attending a City Hall slumber party tonight; internationally, other cities are taking over squares to protest similar austerity measures.

By pitting the KPMG report against community deputations, Team Ford has deliberately polarized the downtown core against suburbanites. Call it ‘wedge politics’, ‘culture wars’ or ‘divide and conquer’, it is a tactic used to distract GTA citizens as hard won public assets are sold off to invisible bidders. Think of the Canadian version of Koch Brothers as high school football coaches, rather than democratic mayors, with transit at the center of the debate.

Ex-Mayor Miller’s legacy was to be Transit City, a light rail network designed to add street level connectivity and make workplaces accessible for outer neighbourhoods; Team Ford proposes to bring another football team and football stadium to downtown Toronto, and extend a Sheppard subway line to nowhere. ‘Austerity will not be pretty’, read a sign at the KPMG protest, but for Team Ford, stadiums, subways and athletes are certainly more important than transit, bicycle lanes, and ‘bike people’, as we are called by Councillor Doug Holyday. For the right, bike lanes are easily sacrificed on the altar of the Almighty Car, and traffic lanes and parking lots are held to be places of worship.

On July 12th, over three hundred bicyclists converged on City Hall, to ask that the newly installed Jarvis bicycle paths remain in place. Used by 890 riders daily, the bike paths connected the east end of the city with the west. Wearing bicycle helmets, and raising silently waving ‘jazz hands’ to show support for councilors arguing for their right to share lanes of traffic, a heated discussion in City Council raged over two days. Central to the debate were these questions- are bicyclists considered worthy of protection? Is Jarvis Street a cultural corridor or highway? And can a lane on Sherbourne Street, 400 m away, be considered sufficient, or do bicyclists have the right to be integrated as part of a citywide network with multiple options of bike routes?

Councillor Shelley Carroll argued that bicyclists will use Jarvis Street anyway, and modes of transport cannot be forbidden under the Highway Transport Act. Councillor Glenn De Baeremaeker said, “I think cyclists should start suing the city when struck by cars given this council’s recorded indifference to our safety.” Every seven hours a bicyclist is hit in the City of Toronto.

Finally, in procedural chaos, City Council voted that the Jarvis lanes were slated to be removed in two years upon the completion of the segregated Sherbourne lanes. A calculated, last minute motion by Councillor Giorgio Mammoliti re-added the reverse fifth lane, to render the prior Environmental Assessment and consultations null and void. Feisty Councillor Kristyn Wong-Tam objected to the last minute amendment by Mammoliti about the lanes in her Ward; rightwing partisan Speaker Nunziata allowed the motion, and eight left leaning councillors walked out upon learning that they will be unable to vote upon the bike plan item by item in the future. The final blow – City staff told Wong-Tam, who is lesbian, that returning the reversible centre lane to Jarvis would cost $570,000, more than 4 times the city grant to Pride, an event which also takes place in her Ward, and is next on the chopping block. (For a detailed discussion of the vote, link here.)

Upon hearing this verdict, ever-ingenious Dave Meslin, the founder of the Toronto Bicyclist’s Union, posted a Facebook call out for riders to take back Jarvis. Two days later, 1100 respectful bicyclists, ringing their bells, circled Jarvis Street to Church Street and rode to City Hall chanting “We just want to share.” As I rode my bike down Queen Street West, an onlooker called out “Pay some taxes”, a byproduct of the new nastiness now made publicly permissible by Torontonians modeling the behaviour of our Mayor, and his allies, toward bicyclists.

In his nine months in office, Mayor Ford has shown preferential treatment for his constituents. He prefers car-drivers over bicyclists, the suburban elite over the downtown intelligentsia, the very wealthy over the marginalized, and corporations over unions. He cannot walk several minutes from his office to a podium to read a brief speech for the flag raising ceremony of Pride; he attends Caribana instead to show that while he may be homophobic, he is not racist. He makes his preferences known by picking and choosing which events to attend, and which deputations to listen to, and when frustrated by community consultation, changes access to democratic process by changing the date of motions, or by running an all-night deputation session, so that the public cannot attend, or hand signaling a councillor to add a last minute motion to stymie progressive motions.

Inappropriately, Mayor Ford has used his office to discriminate against those who are most defenseless, and in need of defense- whether bicyclists or marginalized groups. Ford as a football coach, if not as a democratic mayor, should rise to the challenge of inclusive policymaking, if he wishes to remain in his position. So should his brother, Doug. Going forward, we need to be Team Toronto, not Team Ford.

With special thanks to the blog ‘Driving the Porcelain Bus’ for the expense breakdown of Mayor Ford.

END_OF_DOCUMENT_TOKEN_TO_BE_REPLACED

“It is clear that there is a program to eliminate the public from our great city.” – Kim Fry, the 11th deputant during the Core Service Review at Toronto’s City Hall on Thursday July 28 For a penny-pinching populist, Mayor Rob Ford’s policies are very expensive. Since his October 25th