The title for this post I took from the online flurry of letters that brought out the usual voices in The Star. I will reproduce a number below that both support and demonize the movement to sanction Israel for its depraved mistreatment of Palestinians…

END_OF_DOCUMENT_TOKEN_TO_BE_REPLACED 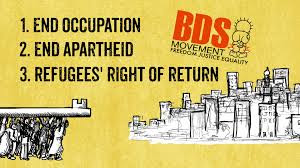 The title for this post I took from the online flurry of letters that brought out the usual voices in The Star. I will reproduce a number below that both support and demonize the movement to sanction Israel for its depraved mistreatment of Palestinians in the occupied territories. I remain convinced that words will accomplish nothing in this long and ongoing heartache. Only strong and principled action has a chance of success. For that reason alone, no concerted effort to label people like me and others who support the cause as anti-Semitic will have any effect whatsoever.

Re: May shouldn’t run away from boycott, Opinion Aug. 22

Thank you very much for your publishing Linda McQuaig’s powerful piece. As a Jewish-Canadian, I am deeply concerned about our collective failure to hold Israel accountable for its war crimes, human rights violations and ongoing military occupation of Palestine. Support for Boycott, Divestment, Sanctions (BDS) is not only growing among campuses, church and union groups, it is also increasing in our Jewish communities.

Why have we been silent? Why have we not understood that it is not anti-Semitic to criticize Israel. It is, in fact, pro-human rights and taking the collective wisdom of our peoples’ histories of being persecuted. Tragically, we know the impact of global silence in the face of state terror.

Those of use who care deeply about Palestinian human rights were thrilled to see the Green Party take a courageous stand in support of BDS. I am very hopeful that Elizabeth May will support this position. This is not a radical position. It is simply taking a very obvious, peaceful stance against violence.

Unfortunately, people who publicly criticize Israel (including journalists and Jewish people) are subject to violent threats and accusations of anti-Semitism.

Much gratitude to Linda McQuaig for her excellent commentary and her courage to speak out about such an important issue. And thanks to the Star for printing this. Although you will likely receive pushback from pro-Israel folks, please know you that you are giving voice to a position supported by many of us.

Canada needs a principled position that respects Canadian values of human rights and the rule of international law. If BDS is one efficient way to lead to that end, then there is a well-justified reason to support this movement.

The problem with Ms McQuaig and her fellow travelers’ support of BDS is that it singles out Israel, not just in the region but amongst the nations of the world, and does nothing to move along the peace process. To say that the solution to the 100-year conflict lies solely on one side can only be rationalized by someone wearing blinders.

Ms May’s thoughtful rejection of supporting this movement should be praised. Ms McQuaig is the one to be admonished for her stance.

I agree with writer Linda McQuaig. The leader of the Green Party should not only stay but work as hard as ever that her party does not become the hijacked home base of the anti-Israel bashing club that singularly focuses on Israel and excludes all others.

The solidarity with Palestine is all well and fine except that there is only silence for the people of Sudan and Syria who we see slaughtered daily on a scale that is horrific and cruel.

The military occupation over Palestinian lands will end when there is trust and a true commitment in place to build peace based on a two-state solution by both sides. Peace will never flow by punishing and demonizing one side in a complicated two-sided conflict.

Elizabeth May needs to stay to fight for the soul of her party. She needs to ensure that the Green Party remains committed to real principles and not false narratives.

Linda McQuaig’s article presents several incorrect statements and a false narrative. BDS is not a “peaceful way to protest” Israel’s perceived misteps – it is an odious attempt to delegitimize the State of Israel. Palestinians live under Israeli occupation because Jordan refused to stay out of the Six Day War, forcing Israel’s hand to take the West Bank from Jordanian occupation. And the author fails to state that West Bank Palestinian Arabs enjoy far more rights than anywhere else in the Middle East.

I see the Star has stooped to a new low. This article exposes your proclivity to show your anti-Israel bias. To defend the BDS movement is exactly the same as calling for the destruction of the State of Israel, the only country of almost 200 in the world that is censured for destruction.

The suggestion that the BDS movement is anti-Semitic is rooted in a narrative created by those who support the 49-year-long illegal occupation of Palestine. The ongoing violations by Israel of international human rights and humanitarian laws, the Fourth Geneva Convention and UN Security Council and General Assembly resolutions are why the majority of Green Party members and others support BDS.

The desperate situation in Palestine has been thoroughly documented by reputable human rights agencies such as Human Rights Watch, Amnesty International and Defence for Children International.

Those in the media have the responsibility to read the evidence regarding the situation in Palestine compiled by internationally credible non-governmental agencies before they accuse the BDS movement of anti-Semitism.

Elizabeth May could quit as Green Party leader this month ‘Broken-hearted’ May says boycott Israel policy has her on verge of stepping down as leader By David Cochrane, CBC News Posted: Aug 12, 2016 5:00 AM ET Last Updated: Aug 12, … Continue reading →

END_OF_DOCUMENT_TOKEN_TO_BE_REPLACED

Dear Elizabeth May, Please don’t resign over Boycott, Divestment, and Sanctions. Far from being “polarizing, ineffective and unhelpful,” the BDS movement seeks to employ moderate, non-violent means (i.e. boycotts and other economic measures) to pressure Israel to end its decades-long … Continue reading →

END_OF_DOCUMENT_TOKEN_TO_BE_REPLACED

The Palestinians need a Canadian champion, specifically a political champion. None of our three main political parties will stand up for them. It would normally be the responsibility of the NDP to demand justice for these beleaguered people—after a…

END_OF_DOCUMENT_TOKEN_TO_BE_REPLACED

The Palestinians need a Canadian champion, specifically a political champion. None of our three main political parties will stand up for them. It would normally be the responsibility of the NDP to demand justice for these beleaguered people—after all that is what social democratic parties are for—but it is apparently

END_OF_DOCUMENT_TOKEN_TO_BE_REPLACED

The Palestinians need a Canadian champion, specifically a political champion. None of our three main political parties will stand up for them. It would normally be the responsibility of the NDP to demand justice for these beleaguered people—after a…

END_OF_DOCUMENT_TOKEN_TO_BE_REPLACED

The United Church of Canada wants “clear reassurance” that Prime minister Stephen Harper does not intend to criminalize Canadians critical of Israel. The post Harper must clarify ‘zero tolerance’ for Israel boycotters: Church appeared first on The Canadian Progressive.

END_OF_DOCUMENT_TOKEN_TO_BE_REPLACED

A recent post on Electronic Intifada discusses a new study guide published by the Presbyterian Church in the U.S. titled Zionism Unsettled. It takes a critical look at Zionist ideology that has influenced many of the unjust Israeli policies targeted by the Boycott Divestment and Sanctions (BDS) movement. In an

END_OF_DOCUMENT_TOKEN_TO_BE_REPLACED

Beneath left: Martha Roth of the Palestine Awareness Coalition An ad appearing on a dozen or more Vancouver buses and in the City Center SkyTrain station has been the target of criticism by some Jewish groups. The four-panel ad shows a map of Israel over the last six decades –

END_OF_DOCUMENT_TOKEN_TO_BE_REPLACED

Mondoweiss has a post about a prank story that ran in the Jewish Press over the Purim holiday. Under the headline – “Defying Boycotts, Jagger, Stones, to Honor Israel’s 65th Birthday” – the JPress article makes the hoax claim that the Rolling Stones are scheduled to perform in Israel in

END_OF_DOCUMENT_TOKEN_TO_BE_REPLACED

Standing for Free Speech: Students for Justice in Palestine at Brooklyn College  in the run-up to the BDS event The BDS panel discussion at Brooklyn College went ahead Thursday. It proceeded as planned despite efforts to discredit the event and intimidate the College in what really amounted to an attack