END_OF_DOCUMENT_TOKEN_TO_BE_REPLACED

Returned to power after four years, Alberta’s Conservative party is governing pretty much as you’d expect from a government that, as Talleyrand supposedly said of the restored House of Bourbon, has learned nothing and forgotten nothing. Consider the matter of the controversial letter from the head of Amnesty International Canada

END_OF_DOCUMENT_TOKEN_TO_BE_REPLACED

An international group of ethical funds with investments in Alberta’s oilsands is concerned the industry’s environmental performance could be creating financial risk. […] Ceres considers greenhouse gas emissions a risk because the industry’s rosy forecasts of U.S. export growth don’t account for the potential impact of low-carbon fuel standards, now

END_OF_DOCUMENT_TOKEN_TO_BE_REPLACED

“The fact remains that there are naturally occurring substances in the water. And if we had never set foot in the region those kinds of results would still be there.” — Minister Rob Renner, September 1, 2010. “The RAMP that’s been there for a long time has done an admirable

END_OF_DOCUMENT_TOKEN_TO_BE_REPLACED
“The fact remains that there are naturally occurring substances in the water. And if we had never set foot in the region those kinds of results would still be there.” — Minister Rob Renner, September 1, 2010.

“The RAMP that’s been there for a long time has done an admirable job.” — Minister Rob Renner, September 1, 2010.

“This is one of the most extensively monitored regions in the world.” — Minister Rob Renner, December 9, 2009.

“The minister asked the panel whether or not Canadians had a first-class state-of-the-art monitoring system in place in the oilsands. In the view of the panel, the answer is no.” — Liz Dowdeswell, panel chair.

“Until this situation is fixed, there will continue to be uncertainty and public distrust in the environmental performance of the oilsands industry and government oversight.” — Liz Dowdeswell, panel chair.

“The existing Regional Aquatics Monitoring Program is not sufficient to detect changes brought about by the industry. The report said the program is not asking the right questions or monitoring the right things. The report said only one of RAMP’s nine objectives has been met while another has been partially met. Four others have not been met and there is not enough information to judge progress on the final three.” — Edmonton Journal, January 31, 2011.

“Failure to detect PAHs in the sample cannot be a reflection of available analytical technology between 1990 and 2007. Although it is likely that concentrations in the river are generally low, it appears the laboratories Alberta Environment used do not have the capability of measuring the low concentrations of PAC found in the water…

Taking into consideration all data and critiques, we generally agree with the conclusion of Kelly et al. that PACs and trace metals are being introduced into the environment by oil sands operations…

END_OF_DOCUMENT_TOKEN_TO_BE_REPLACED

“The fact remains that there are naturally occurring substances in the water. And if we had never set foot in the region those kinds of results would still be there.” — Minister Rob Renner, September 1, 2010. “The RAMP that’s been there for a long time has done an admirable

END_OF_DOCUMENT_TOKEN_TO_BE_REPLACED

I wrote to Alberta Environment Minister Rob Renner two weeks ago inquiring what, if any, plan the Alberta Government had to deal with a tailings breach.

Here’s what Minister Renner wrote back:

The answer is not surprising. In the letter, Renner provides few details to support broad statements such as Alberta tailings ponds are carefully regulated and the province has a strategy that can adequately deal with a tailings breach.

This Pembina Institute document (pages 19-24) and blog post outlines the history of tailings breaches in Alberta, what the consequences of a new tailings breach would be, and the lack of government transparency with respect to provincial regulations governing tailings ponds, pond safety and breach response plans. As the chart below clearly indicates, since much of the regulations, safety assessments, and emergency response plans are kept secret, the Alberta Government and Oilsands Industry are the only one who know how safe the tailings ponds are, who’s at risk if a breach occurs, and how prepared we are to respond to a breach. 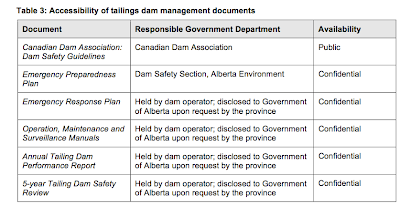 In an interview I had with renowned ecologist Dr. David Schindler, he stressed that a breach would have catastrophic consequences, particularly if one occurred during the winter. According to Schindler, a breach in winter would allow the toxins to be submerged under the ice for at least four months before any recovery operation could begin. This is because there is no known way to clean a tailings breach under ice.

Consequently, pollutants would easily disperse, being “in Lake Athabasca in about a week, all the way down the Slave within three to four, probably in much of the Mackenzie after that.” Meaning, not only would a tailings breach effect downstream communities in northern Alberta, but also in the Northwest Territories. 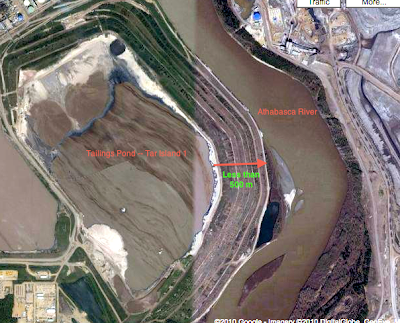 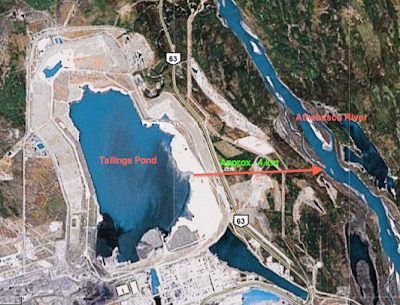 This is interesting because in his letter, Minister Renner states:

“Under Alberta’s Water Act, oil sands companies are required to document in an Emergency Preparedness Plan the extent of the area that would be affected if a breach of their tailings structures occurred. Potential downstream effects must be identified, as well as the assigned roles and responsibilities of staff to deal with the breach. Each group downstream, with the potential to be affected by the breach, must have a copy of the Emergency Preparedness Plan.” (6th Paragraph)

If all oilsands companies that operate tailings ponds are mandated to provide each “group” downstream (which I interpret to mean oilsands companies — though I’m not sure since the wording is ambiguous) with a copy of their Emergency Preparedness Plan, how come Albertans as a whole are not allowed similar access? As the Pembina Institute points out, current provincial legislation allows companies to keep these plans private.

Shouldn’t downstream communities be aware of the risk they are placed in and what measures oilsands companies have in case of a breach?

Further, if Dr. Schindler is correct and a tailings breach in winter would allow pollutants to travel rapidly without an opportunity to stop the spread for months, should the Alberta Government not share this information with the Northwest Territories?

In the wake of more ducks landing in Northern Alberta tailings ponds this week, many have called on the province and industry to eradicate wet tailings ponds quicker. Seldom attention is paid to the larger consequences of tailings ponds, as well as the risk they pose to surrounding communities — particularly if a breach occurred.

To me, this is a more compelling reason to phase out wet tailings ponds immediately.

UPDATE: Alex Denonville, a reporter with the Slave River Journal, is reporting that the Alberta Government’s Canadian Dam Association: Dam Safety Guidelines is only available for a $60 fee. Why the steep fee when the document is in the public interest? It should be easily accessible by all.