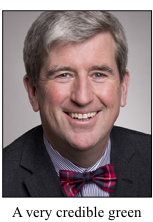 I first took note of Glen Murray when he was mayor of Winnipeg. I was active in my community in inner city Calgary and Murray seemed to share my sense of what cities can and should be. Now he aspires to lead the Green Party of Canada and this strikes me as an excellent match.

After moving to Ontario, he was appointed by Prime Minister Paul Martin to chair the National Round Table on the Environment and the Economy. Returning to politics at the provincial level he served, among other ministries, as Ontario’s environment minister during which time he led the development and implementation of the province’s cap-and-trade system, and played a founding role in the Quebec-Ontario-California carbon market. After the Liberal’s election defeat he left politics to served as executive director of the Pembina Institute, a leading energy/environment think tank, and has since moved back to Winnipeg to join Emerge Knowledge, a software company that helps government agencies track recycling and garbage-collection data.

Murray’s credentials extend well beyond the environmental. For example, he was reconciling before “reconciliation” became politically fashionable. As mayor of Winnipeg, he worked closely with indigenous people on new approaches to jobs, recreation, and public safety. He formulated the city’s urban Aboriginal Policy and championed Thunderbird House which serves as a place of healing and cultural preservation. For his efforts, First Nations leaders awarded him an Eagle Feather, their highest honour.

He was a founder of the Canadian AIDS Society and has been involved in HIV/AIDS awareness and prevention throughout his life. In 2003, Egale Canada presented him an award for “Fighting for LGBT Justice & Equality.”

In addition to the above he has received a long list of awards, including the Queen’s Golden Jubilee Medal and the Queen’s Diamond Jubilee Medal for his outstanding contributions of citizenship and public service and the President’s Award from the Canadian Institute of Planners. He has served as chair of the Big City Mayors’ Caucus and as CEO of the Canadian Urban Institute.

I could go on at length. The point is that this is a uniquely talented person with solid accomplishments in a number of fields including those of greatest importance to the Green Party. For the party, this is an opportunity to acquire a gifted leader to replace the redoubtable Elizabeth May. He’s theirs for the taking.