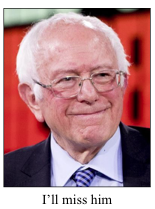 So Bernie Sanders has packed it in. As someone whose views commonly fall within the ambit of social democracy, I could have easily voted for Bernie—if I was a citizen of his formerly great nation. The U.S. is desperately in need of some of his views, especially on growing inequality and the domination of wealth in politics, but there is a bigger challenge than even these. That, of course, is getting rid of the world’s most dangerous man, he of the orange hue, and I feel, like most Democrats apparently, that Joe Biden, good old reliable, mainstream Joe, is (Read more…) better choice for that job.

Bernie was always a risk for the party. Many of his views are definitely not mainstream and he would have been a major target, and an easy one, for the big money that’s corrupting America. Now much of that wealth and its attendant power may very well swing behind Joe.

And I don’t find Biden that hard to take. Just the fact he is a decent human being makes him a huge improvement over the incumbent. And his climate platform, the most important policy area, isn’t half bad, in contrast to the suicidal policies of Trump. Greenpeace gives Biden’s platform a B+. They gave Bernie’s, which of course included the Green New Deal, an A+.