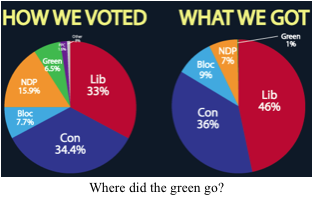 Looking over the Prime Minister’s new cabinet, one portfolio that stood out because of its absence was Minister of Democratic Institutions. This is, or was, a portfolio with something of a chequered history.

It was first created by Paul Martin in 2003 during his truncated term as prime minister and entitled the Minister responsible for Democratic Reform. Martin had expressed concern about a “democratic deficit.” In 2005 the title was changed to “Democratic Renewal” and the portfolio was assumed by Belinda Stronach who had recently crossed the floor from the Conservatives. When the Conservatives won the 2006 election the (Read more…) reverted to “Democratic Reform.” With the election of the Liberals in 2015, the portfolio became “Minister of Democratic Institutions” replete with hope for substantial reform following Justin Trudeau’s promise of, among other things, never holding another election under the undemocratic First-Past-the-Post voting system. That promise was, of course, betrayed and we have just experienced another election under FPTP.

It now appears that, with the trashing of the appropriate ministry, the Prime Minister is trashing the whole idea of a democratic voting system. Out of sight, out of mind, for a promise that came back to haunt Mr. Trudeau. Ironically, as discussed in a previous post, support for a proportional system, which would make the people’s will manifest in elections, has probably never been higher. Many conservatives, who have traditionally opposed proportional representation, have been converted because in our recent election their party got more votes than the Liberals but they are forced to smoulder in opposition while Justin, he of the good hair, runs the show.

The democrats among us smoulder, too, as even the consideration of a democratic system fades entirely from the federal agenda.