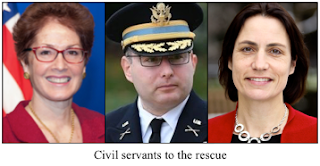 The health of democracy, indeed government generally, often rests more with the quality of a country’s civil servants than with the quality of its politicians and their associates. Rarely have we seen as graphic a contrast between the two as we are seeing at the Trump impeachment hearings. On the one hand, we have seen a series of witnesses illustrating the very best in American government, indeed in American society. On the other hand, we have Trump’s rabble of enablers and associates.

For example, among the witnesses we have Marie Yovanovitch, former ambassador to the Ukraine, who courageously defied the (Read more…) by responding to a subpoena from Congress in order to testify. Her testimony included comments that Trump and his allies’ actions may have encouraged corruption in Ukraine rather than help curb it. Ms. Yovanovitch has given 33 years of sterling service to her country for which she was rewarded with a smear attempt by Trump and his allies.

Then there is Lt. Col. Alexander Vindman, the White House’s top Ukraine expert, who expressed concerns about President Donald Trump’s phone call with the Ukraine President to the National Security Council. He testified that it was “completely apparent” that to get a meeting with Trump, the Ukrainian president had to deliver an investigation of Biden’s son. Vindman, who was awarded a Purple Heart for his service in Iraq and still carries shrapnel in his body, is currently Director for European Affairs with the National Security Council.

Fiona Hill, a Russian expert, made a particularly powerful witness. Her testimony dismissed the suggestion that it was Ukraine that interfered in the 2016 U.S. election as a “fictional narrative,” emphasizing that it was the Russians who “systematically attacked our democratic institutions” and who perpetrated the Ukraine narrative. Hill served as an intelligence analyst under Presidents George W. Bush and Barack Obama, and as Deputy Assistant to the President and Senior Director for European and Russian Affairs on the National Security Council until she resigned in July.

And there were others, such as such as William B. Taylor, Jr., a decorated Vietnam veteran and top U.S. diplomat in Ukraine, who testified that the president of the United States pressured the president of Ukraine to sully the reputation of a political rival, Joe Biden, in exchange for a meeting in the Oval Office and a release of defense funds already approved by Congress. The integrity and dignity of these witnesses shone in bright contrast to the shenanigans of the wretched characters that Trump surrounds himself with, a number of whom are now in jail with more on their way.

The American civil service will require extensive repair after Trump and his minions are through with it. Nonetheless, if there is hope for America through these times of dimmed democracy, it lies largely with the integrity and ability of dedicated civil servants, specifically the integrity and ability of people such as Yovanovitch, Vindman and Hill.

Incidentally, all three are immigrants.