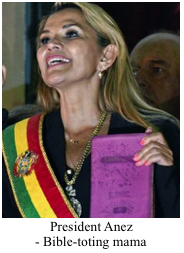 Christian evangelicals are having good innings in the political sphere these days. First, their man Donald Trump becomes president of the U.S.; then another of their populist heroes, Jair Bolsonaro, becomes president of Brazil; and now Bible-toting evangelical Jeanine Anez has assumed the presidency of Bolivia. Hallelujahs all around.

Curiously, for an ostensibly moral bunch, they seem to have a fatal attraction to bad boys. President Trump, for example, is a misogynistic, racist, lying narcissist without even a distant relationship with common decency. Yet evangelicals love him. Or at least white evangelicals do. He captured 80 per cent (Read more…) their vote in the 2016 election.

And if Trump is bad, Bolsonaro is outright evil. This homophobic, racist misogynist once called for the assassination of a former president; argued that torture is a legitimate practice; told a fellow female legislator that he wouldn’t rape her because she was ugly; and said he would rather have his son die in an accident than come out as a homosexual. He has referred to the military dictatorship of 1964-1985 as a “glorious” period but faults it for “the error … that it tortured, but did not kill.” Like Trump a climate change denier, he wants to deforest and develop the Amazon. A former military superior once reported he was “lacking logic, rationality and balance.” But a lack of rationality and balance doesn’t bother evangelicals. Without their support he wouldn’t have become president. Needless to say, he is a fan of Donald Trump.

And most recently, we have right-wing senator Jeanine Anez replacing Evo Morales as president of Bolivia. Although her credentials are more respectable than those of Trump and Bolsonaro, they include a fair measure of bigotry. She has made derogatory statements about the country’s indigenous people, who make up 60 percent of the population, tweeting on one occasion, “I dream of a Bolivia free of Indigenous satanic rites. The city is not for Indians, they should go back to the mountains or the fields.”

What attracts the white religious right to these barbarians is certain common beliefs, particularly around gender, including opposition to abortion and gay rights. They see these leaders as divinely appointed and themselves as the true believers. They tend to view the world in the same fundamentalist way—black/white, good/evil, us/them. Evangelism is a brittle faith, overcome by the challenge of multiple perspectives.

I have often wondered if it isn’t this cohort of Americans that explain why the U.S. is among the least compassionate and most vindictive of Western nations. Its foreign aid as a percent of GDP, for example, ranks near the bottom of all developed countries. Its legal system is one of the harshest by Western standards, the only Western country that still has capital punishment. All this in addition to its perpetual waging of war. Not a lot of Christian love and forgiveness here.

Not all white evangelicals are fans of demagogues, of course. In the U.S. there’s that 20 percent who didn’t vote for Trump. Many of those are no doubt liberal and believe in social inclusion. But the solid majority prefer the visceral appeal of a Trump or a Bolsonaro to the promise of honourable leadership. And their prayers are being answered.