Throughout his career, whenever his job was on the line French president Nicolas Sarkozy has never shied away from pandering to the worst instincts of the French people.

With the polls showing that the French are abandoning the political center and that the more xenophobic have begin to flock to the far right, Sarkozy went into full pander mode echoing fascist party attacks on immigrants.

Is it any wonder the most violent and hateful would think they have been given the go ahead to consider immigrants legitimate targets? 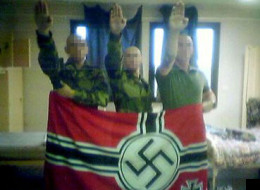 Police in France are hunting three former soldiers who were fired for a suspected neo-Nazi gang in connection with three shootings near Toulouse which have left seven people dead.

The men, described by French media as “muscular and tattooed”, were dismissed in 2008 after they were pictured giving a Nazi salute in front of a swastika flag.

Police have linked the men to the shooting of three soldiers from their former regiment, the 17th Parachute Engineers, on 15 March. Two soldiers died in the attack and a third was critically injured.

France’s Le Point news magazine said: “This is the first real lead the police have. [It is believed] there could be a link to the three soldiers dismissed from the army four years ago.

“The profile of these men corresponds to the scant information investigators have on the Toulouse killer, that is to say, muscular and tattooed.

“This lead is being followed up by both civilian and military authorities.

The shooting on 15 March followed another attack on 11 March, in which a soldier was shot and killed outside a gym in Toulouse.
All of the soldiers were reported to have been black or of north African origin.

Nicolas Sarkozy bears personal responsibility for this tragedy due to his despicable pandering to the worst parts of his people’s natures.