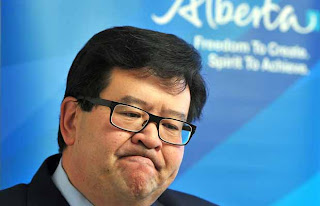 Last year Gary Mar was the odds on favorite to win the leadership of the Alberta Progressive Conservatives and by extension the Premiership of the richest province in Canada.

Now he’s been peremptorily and unceremoniously summoned back to Alberta from his consolation prize/exile job as Alberta’s Asian trade representative in Hong Kong and suspended without pay by the upstart candidate who beat him to the job he really wanted, Premier Alison Redford.

His sin?  Desperately trying to pay off the huge debt from his failed leadership bid with a March 1st fundraiser that auctioned off a trip to Hong with invitations that strongly implied business help in Asia for donors.

To the casual observer of course, accusing any Alberta Tory of ethics violations is a bit like accusing a fish of liking water.  Apparently there are big blatant lines you shouldn’t cross even in a oil sheikdom petro-state like Alberta.  Particularly if your boss is someone you just fought a contentious leadership battle with.