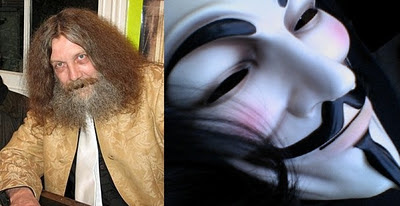 The author of graphic novel masterpiece V for Vendetta reflects on the strange new life of his creation as a symbol of protest and resistance.

It all comes back to Moore – a private man with knotty greying hair and a magnificent beard, who prefers to live without an internet connection and who has not had a working telly for months “on an obscure point of principle” about the digital signal in his hometown of Northampton. He has never yet properly commented on the Vendetta mask phenomenon, and speaking on the phone from his home, Moore seems variously baffled, tickled, and quite pleased that his creation has become such a prominent emblem of modern activism.

“I suppose when I was writing V for Vendetta I would in my secret heart of hearts have thought: wouldn’t it be great if these ideas actually made an impact? So when you start to see that idle fantasy intrude on the regular world… It’s peculiar. It feels like a character I created 30 years ago has somehow escaped the realm of fiction.”