[edit: I just noticed that I passed 1000 hits! Thank you everyone for reading my blog! I feel so special!]

I’m sorry that my posting has been so erratic lately. To be honest I haven’t really had any good topics to write about and I don’t want to bore you with the drivel of my daily life.

I got my bike all set up and greased and pumped and ready to rock — and it’s awesome! I forgot how awesome biking is. I’ve been riding all over the city. I’ve been panhandling at my old spot (Industrial and Riverside) and so I bike there, pan, and then go downtown or up the Vanier Parkway to find a park to relax in. It’s so beautiful this time of year! There’s ducks and Canada Geese and Kat and I even saw a Woodland duck! They have these cool feathers on their heads that make them look like they’re wearing stylish hats. So stylish, in fact, that we humans don’t even have an equivalent, really.

I’m looking forward to having coffee and conversation with two of my favourite people soon: zoom! and Dr. Lyons. We’ve got a lot to catch up on, such as the launch of the CSSDP’s not4me.org website, a response to the Government of Canada’s AWFUL not4me.ca ‘drug “education”‘ website.

I put education in double quotes because selectively telling people things isn’t education – it’s propaganda. Or bias, or double entendre, or brainwashing. Whatever you want to call it, it’s awful. Of course, not4me.ca doesn’t mention harm reduction at all, and it’s basically a continuation of the failed approach based on scare tactics and offering little to no real fact. The sliver of fact that does find it’s way in is usually extremely outdated and irrelevant. Instead of trying to scare young people out of doing something (which never works — even though we tell young people not to ride a bike without a helmet, they do it anyway, or even better – don’t ride your bike off that 15-foot drop with or without a helmet!) why don’t we present them with the facts: what a drug is, what it does to your mind and body (and I mean both sides of the story – the positive and negative effects. And don’t try to tell me there’s no such thing as a positive effect — when you’re trying to achieve a state of mind and a drug does that, it’s positive to the person that’s doing it), and what dependancy is, and what addiction is (two very different things). I could go on and on, but you get the point. Check out their website! And compare it to the government’s site.

YSB’s new website is close to being up, as far as I know, and they’ve already released the new pamphlets. They’re very cool — they have all our pictures on them, plus updated information! Pretty awesome. I’ll try and upload a copy at some point.

I’ve read some really great editorials about the drug war recently. It seems to me that slowly, more and more people are starting to actually look at drug policy with open ears, eyes and minds, and they’re starting to see the truth: prohibiton does nothing good. At all. Period.

It seems so obvious to those of us that work in the field, but most people believe that drugs are inherently bad and harmful to society. I was thinking about this earlier today. The RCMP, for example, constantly push the ‘we want to wage war on drug dealers’ and ‘we need to take away their livelihoods, or else they’ll never go away’ lines. I’d love to sit and argue with their policymakers — the only way to take away their livelihoods is by TAKING THEM AWAY, not by putting them in jail. When you’re making $250,000 a month, a year in jail doesn’t matter at all, obviously. They think that they’re getting all of a dealer’s assets when they bust him, but that’s so far from the truth it’s not funny. And, to be honest, I’m sure that the RCMP knows this, they just have to tell the public otherwise. Dealers that are making that kind of money constantly funnel it into overseas accounts, or launder it in some other way. 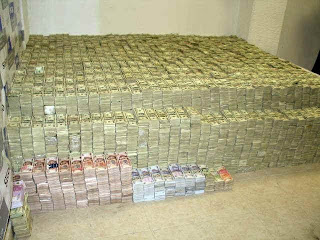 There’s a famous picture [inset] that shows a roomful of money made from selling drugs. Look at it! There’s gotta be literally MILLIONS of dollars there! How else could someone make so much money so quickly unless they had a MONOPOLY on the markey — which ‘druglords’ do. (I don’t like the word ‘druglord’ but sometimes I have to use it). Honestly, the RCMP use this image as ‘proof’ that drugs are bad and that we need to stop drug dealers — but they never explain why they have so much money. The cost of drugs is controlled entirely by the black market, and it follows the basic rules of supply and demand. If you control all of the supply and you can influence the demand, you can make as much money as you want. Think the price is too low? Withhold a shipment and the prices will skyrocket. Because there’s no regulation, when the supply comes back the price won’t come back down like it would in an open market. Drug users that buy their drugs on the street (like myself) have absolutely no say on the price (for the most part – sometimes you can get a ‘deal’ if you spend enough money, but it’s rare that we have enough money to do so! And I put ‘deal’ in quotes because they could sell us our drugs at a fraction of the cost and still make a killing) and so we pay whatever we’re told we have to pay. The only control we have is to boycott someone if they’re charging way more than the normal price — but if they’re the only person around you’re going to cave in sooner or later. For example, the normal price of a Hydromorph-contin 6mg capsule is $4-5. You usually get 4 for $20, which is 24mg (though sometimes you can get a 30mg tablet for the same price, it depends on the dealer). However, there’s a guy selling his 6mg caps for $10 each — literally double the price. Everyone hates the guy because he’s openly exploiting everyone. But there’s nothing we can do about it — we avoid him as much as possible but sometimes you’re so sick you just pay the goddamn price and move on. Still, it’s just another fucking symptom of the drug war. And people wonder why users commit crime? Say he was selling those pills for $2.50 each. You pan up $10 and buy four, and you’re good for the day (even 4 of them is more than enough for the average opiate user). Suddenly, he gets robbed or busted or his supply is short, and he ups the price to $15 each. All of a sudden, you need $60 to get the same fix you paid $10 for yesterday. If you’re not a miracle-panner, you need to make a quick $50 bucks, and oh look, that car’s window is open, and hmm… there’s an iPhone! Gone.
Sorry for blabbing on and on, but I just wanted to illustrate my point.
I’ll write more soon, I promise! Take care folks.
If you want to read the rest, come on over to the site to read it!