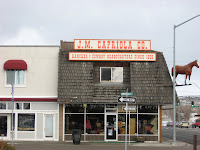 Canadians are filled with optimism and excitement in anticipation of the visit by non other than the grand-pumba himself, U.S. President Barack Obama. Many Americans across the United States are filled with optimism and hope that their new President is going to shoot down a beam of light from political heaven to solve the country’s domestic and international problems. Little does the rest of the world see “the other side” behind all the smiles and cheers from the international liberal media.Since the start of the year, I have been residing temporarily, for work purposes, in a small town called Elko in “the silver state” of Nevada. Well away from the lights, the hustle and bustle of Las Vegas, Elko is considered to be one of the gold mining capitals of world. With the steadiness of commodity prices and despite the economic recession, Elko is now famously labelled as having the highest paying and most accessible jobs in the state. Containing two main thoroughfares, a Walmart superstore, a one-story JC Penny, a few gun stores and a population of a little under 17,000, Elko is the postcard of small town USA. As the host of the annual national Cowboy Poetry Gathering and the home of the Western Folklife Centre, this small town bears a culture far different from the metropolises of Las Vegas, San Francisco or NYC. Despite Barack Obama winning Nevada’s five electoral votes on November 4, 2008, Elko county gave John McCain a whopping 70% of the votes. In 2004 G.W. Bush ousted John Kerry 78 to 22. It’s highly conservative atmosphere is clearly reflected in the nature of the industries and lifestyles of the people. For example, despite being next to the green state of California, Nevada painstakingly lacks a viable recycling program (it breaks my heart to throw away my egg cartons). Furthermore, majority of Elkonians are family oriented church-goers, most of whom work in the mining industry and hunt during their spare time. Democrats are infamously labelled here as being “tree-huggers”, “anti-mining” and “anti-gun”. To no one’s surprise, not a soul in my office, but myself, was cheering and excited during the “much anticipated” day of Obama’s inauguration. Not only was the energy we see on TV not present, but some were even explicitly expressing concerns over what the Democratic controlled Whitehouse and congress would do with respect to the mining industry (i.e. over regulate) and with social issues like abortion, gay marriage, gun ownership, and “socialized” healthcare. I am an agnostic Chinese Canadian who has grown up and thrived in the urban settings of multicultural downtown Toronto. I consider myself socially liberal and fiscally moderate. I put my career first and don’t see myself settling down, starting a family , nor having kids anytime soon. Contrastingly Elko is 81% Caucasian, 17% Latino or Hispanic, and 2% “other”. Sixty percent of the population is married and 73% of married couples have two or more kids. So where do I fit in? Definitely in the “other” category in many regards. Needless to say living here requireda big adjustment and a lot of understanding on my part. Over the months, after having interesting conversations about life with many fascinating people (both white and blue collar) and experiencing the unique small town USA culture, I have come to learn many things and to dispel many myths and stereotypes. Besides the occasional awkward stares and questions, I have not met one person who has been rude, discriminatory or unhelpful. As a pleasant surprise, I have come to realize that many are in fact fairly tolerant, very intelligent, accepting and welcoming despite the clichéd negative stereotypes of small-town Americans. As a politics fanatic, it was good for me to realize the importance of “reaching across the aisle” to work together, patiently, with those who think differently in order to achieve that common goal. Every single American has the similar of intention of wanting the city, state or nation to prosper as a whole. This experience has also taught me the importance of being politically pragmatic and flexible by not adhering strictly to some sort of hard line right or left ideology. Abe Lincoln and FDR had the right idea… and maybe Barack Obama will espouse the same. But don’t worry… these moments of self-actualization doesn’t mean I’m going to start voting Conservative or Republican anytime soon.